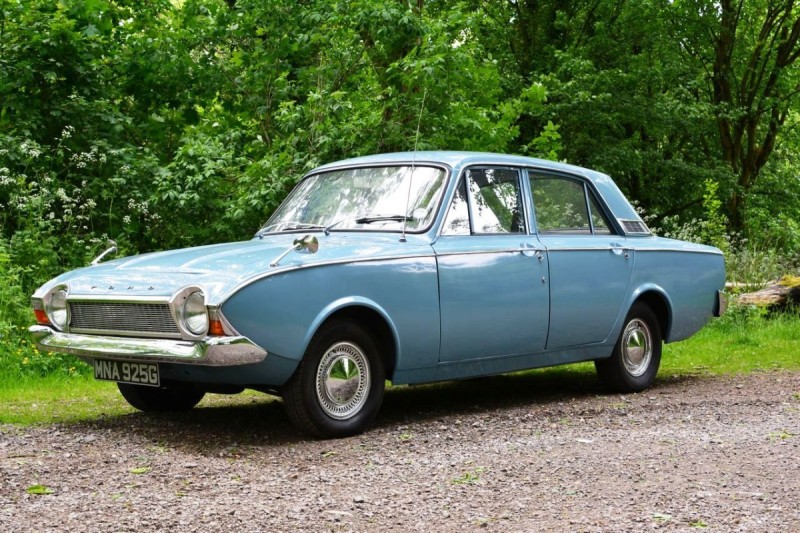 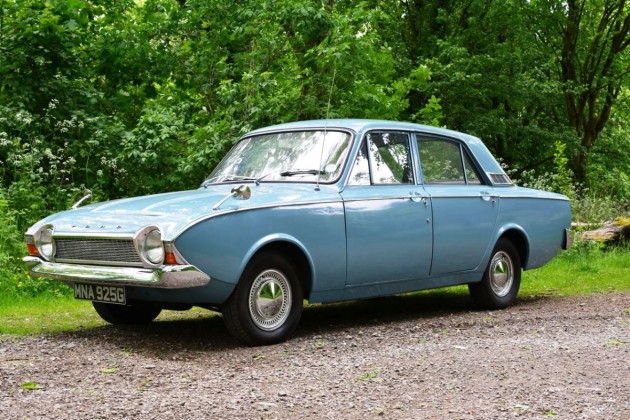 The Ford Corsair made its debut at the 1963 London Motorshow and was designed to fill a gap in Ford’s model line-up that required a magnifying glass to spot.

A replacement for the Consul Classic range, it was effectively a long wheelbase version of the Cortina MkI but with a comprehensively re-styled body that was clearly inspired by the American Ford Thunderbird. A sharp horizontal V-shaped crease at the very front of the car gave it an aerodynamic look while at the rear the jet-like theme continued with sharply pointed vertical light clusters which hinted at fins.

Under the bonnet it only got a 60bhp 1.5-litre Kent engine rather than the big 289 cubic-inch V8 that came with its transatlantic cousin, but from September 1965 the range was updated with the new V4 1,633cc Essex engine which produced 76bhp and could get the car to 60mph in 15 seconds with a top speed of 90mph. A 2-litre version was soon to follow which raised the top speed to 110mph.

The Corsair was replaced by the MkIII ‘coke bottle’ Cortina in 1970, at which time the enlarged Cortina became Ford's mid-sized car, and a new smaller model, the Escort, had already filled in the size below. The new Ford Capri took on the performance and sporty aspirations of the company. Over its six-year production, 310,000 Corsairs of all types were built of which only 556 are still UK registered according to DVLA figures.

First registered in March 1969, this particular Corsair V4 Deluxe is one of only 26 such cars remaining in the UK and must surely be one of the best, having covered only 32,250 miles from new. Although the V5C records just one owner, it was acquired by the vendor from a private collection in 2014 in order to take him on his annual pilgrimage to the Kinsale Car Club Classic Rally in Ireland in 2015.

He reports that it not only completed the 1,000 mile return journey without fault, cruising happily at the legal limit and averaging 25mpg, it also won a coveted ‘Best in Class’ trophy. As you can see, the car remains in very good and highly original condition throughout and certainly drove beautifully when we were treated to a short test drive on the occasion of our visit, being as smooth, tight and rattle-free as you would hope from such a low mileage example.

Due to have a fresh MOT in time for the sale, it also comes with 24 old MOTs back to 1992 (at which time it had covered 15,303 miles), a V5C which still only records one owner and an original owner’s handbook. No doubt capable of scooping more awards in the future, it would sit well in any car collection.