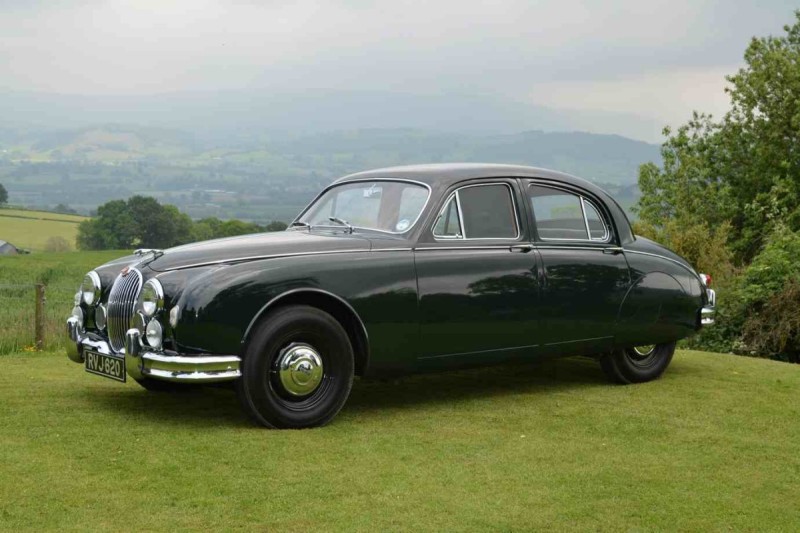 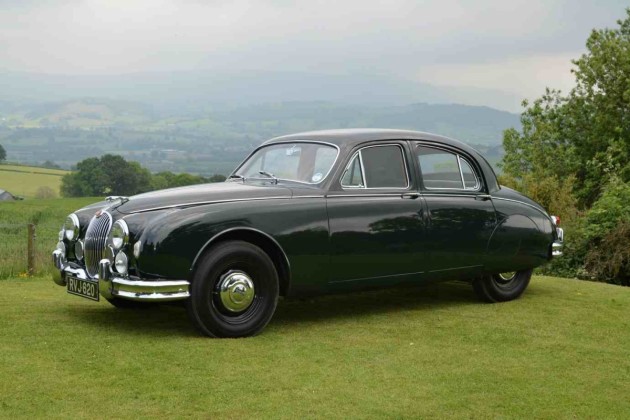 Jaguar liked to be seen to embrace new technology, the spectacular D-Type using revolutionary disc brakes to great advantage on the track and aerodynamics playing an ever greater role in their designs.

Back in the office however, things were a bit more cautious, their svelte looking all-new 2.4-litre saloon, unveiled in 1955, being their first tentative step into the world of unitary construction. To be on the safe side, they had massively over-engineered the car with thick door surrounds, chunky windscreen pillars and had even managed to slip in what was not far short of an extra box-chassis underneath just to be sure.

This ultra-stiff body structure was to serve the car well, allowing the supple suspension to work effectively on the road and the track. Its styling was pure Lyons, the slippery shape making almost all saloons, in whatever price bracket, look dull, frumpy and outmoded by comparison.

Its 112bhp 2,483cc straight-six engine was a de-stroked version of the 3.4-litre XK unit used elsewhere in the range and although down on outright power compared with the other XKs, it possessed a willingness to rev and silky smoothness that the rest of the range could never quite manage. It was more than sufficient to allow the new car to top 100mph which was all the Jaguar buyer needed for bragging rights at the 19th hole.

Initially only available as a 2.4-litre, it was soon obvious that the car was crying out for more power so the magnificent 3.4-litre XK engine was also on offer from 1957 onwards. A natural track car, the MkI came to dominate saloon car racing of the era, racking up numerous wins in the hands of legendary drivers such as Tommy Sopwith, Roy Salvadori and Stirling Moss. The model sadly gained an enduring notoriety when, on 22nd January 1959, former motor racing world champion Mike Hawthorn was killed in an accident involving his own highly-tuned 3.4-litre (VDU 881) on the Guildford bypass in Surrey.

A heavily revised MkII version arrived in late 1959, with a fresh interior, new dash layout, thinner pillars and a larger rear window. The engine choice was widened to include the even more powerful 3.8-litre and disc brakes were standardised across the range. From this moment on, its predecessor, hitherto known as the Jaguar 2.4-litre and 3.4-litre were referred to as the MkI.

This stunning and original 2.4-litre has had just two local owners from new and has covered less than 30,000 miles in in its 54 years to date. British Racing Green with a Suede Green interior, it was sold new through County Motors of Eign Gate in Hereford (now Steels of Westgate), on 24th May 1958. As the original purchase invoice confirms, its first owner was a Mr Rhys-Powell of Talgarth who part-exchanged his Zephyr for £530.60 against the new £1,019 Jaguar.

We are led to believe that Jaguar changed the speedometer under warranty during the first year, although whether the new unit was set to reflect the already accrued mileage we don’t know. In any event, the 26,485 miles displayed today cannot be far wide of the truth. Rhys-Powell was a man of small stature who found reaching the gear lever awkward and, having other vehicles at his disposal, he didn’t drive the Jaguar much, putting it into storage on his farm for good when he bought a new Rover in 1966.

In 1977, local garage owner Fred Lloyd was asked to fit a tow bar to the Rover and spotted the Jaguar languishing in the corner. Impressed by the condition of the car, he asked if it was for sale and was told that £1,100 would buy it but not a penny less. A deal was struck and RVJ 620 changed hands shortly thereafter.

A trained motor engineer, Lloyd used his evenings and weekends to clean the car up and carefully recommission it for use. A day out at the JDC Concours at Weston Park in 1978 proved to be a turning point for both him and the car, the award that he won that day cementing his growing realisation that RVJ 280 was no ordinary Jaguar.

From that day on RVJ 620 led a pampered life and became a regular on the concours scene, scooping prize after prize as the years rolled by. In 1987 it was awarded the Champion of Champions at the national JDC rally and in 2005 was specially invited to Browns Lane to celebrate the 30th anniversary of the MkI.

Throughout Lloyd’s 39-year ownership it has lived in a centrally heated garage attached to the house in surroundings more like a living room than a car storage area. Here Lloyd would spend many happy hours keeping the car in pristine condition for its next show outing. We can confirm that with the exception of the exhaust system, the number plates and the shock absorbers, the car is pretty much exactly as it left the factory.

Even the paintwork seems largely original although the boot area received some paint rectification many years ago where luggage movement had scratched the arches, and one of the sills also got a touch up at the same time using ICI Belco Cellulose. There was some discussion about repainted door shuts but Lloyd assures us that these have never been touched and were hand painted new at the factory, a fact that we have since corroborated with an experienced Jaguar restorer.

A museum quality gem, this ‘reference car’ also comes with its original buff log book, guarantee card, service voucher book, workshop manual, owner's handbook, concours certificates and full toolkit, the latter including the brass tyre valve removal tool and flexible brake-bleed tube in its original Dunlop tin. It sits on a correct set of Dunlop cross ply tyres and has retained all the tiny details so often lost on a restored example, such as the Trico badge on the washer bottle and the hand finishing marks on the door shut areas left by the employees at Browns Lane all those years ago.

Surely one of the finest MkI Jaguars remaining, it would be the pride of any collection.