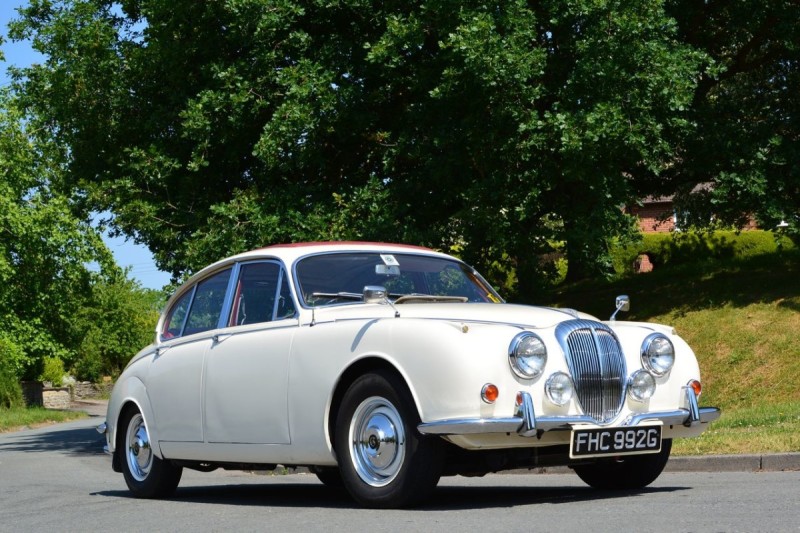 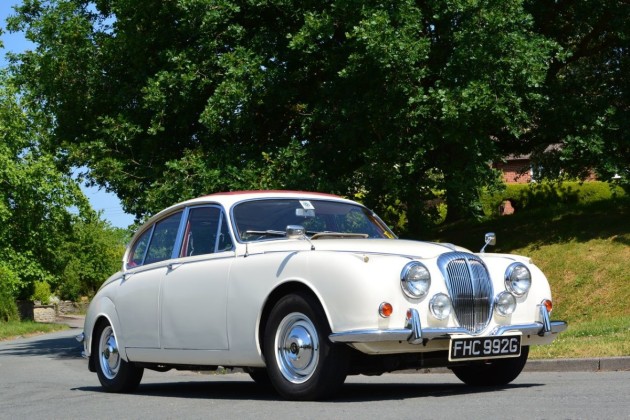 Apart from gaining a much-needed extra factory, Jaguar's acquisition of Daimler in 1960 also brought with it the exquisite Ed Turner-designed V8 engine. By installing this 2.5-litre 'hemi' into the MKII bodyshell, Jaguar hoped to create a more exclusive, upmarket car that would appeal to Daimler's more traditional client base.

Launched in 1962, the new model was instantly distinguished from its Jaguar siblings by the traditional Daimler fluted grille and was initially only available with a bench front seat and 3-speed automatic box. Otherwise identical to the MKII, it featured all round disc brakes, independent front suspension and a Panhard rod located live rear axle. With 140bhp and 155lbft of torque on tap from its magnificently smooth and sonorous V8, the Daimler was capable of 115mph. It was also said to enjoy superior chassis dynamics to its Jaguar siblings thanks to its more favourable weight distribution due to the relatively light-weight engine.

At the end of 1965 the final drive ratio was changed from 4.55:1 to 4.27:1, addressing complaints that the car as launched had needed to exceed its recommended rev limit in order to reach its top speed. In May 1966 Autocar tested a 2.5 V8 and timed it to 60mph in 13.8 seconds with a top speed of 112mph, commenting that: ‘The Daimler’s particular strength is its sweet and near silent running at any engine speed.’ By the time production came to an end in 1969, some 17,600 had been sold, making it the best-selling Daimler ever.

This very late model V8 was first registered in January 1969 and has had just three owners from new, the first being a chemist in Bournemouth who owned it for over 10 years, the second a gentleman in Worcester who owned it for 12 years and the current owner who has owned it for 24 years.

Always well maintained and kept garaged when not in use, the car comes with a good history file from new including the original service book which is stamped 17 times up to 49,226 miles in August 1989 with many bills to show subsequent maintenance. These include a reconditioned gearbox and torque converter at around 50,000 miles and an engine overhaul with new piston rings etc at around 62,000 miles in 2002. The bodywork was also restored about 30 years ago.

More recently the vendor has fitted uprated Zeus brake calipers all round and all new brake pads were fitted earlier this year. Other relatively recent new parts include front and rear shock absorbers, a new alternator, electronic ignition, spin-off oil filter conversion and stainless steel exhausts which emit a wonderfully mellifluous burble. In the interests of safety, the vendor has also fitted rear seat belts, a high level brake light inside the rear screen and hazard warning lights.

As we discovered on a lengthy test drive, the car goes very nicely indeed with a notably smooth and refined ride and excellent oil pressure, although the vendor advises that it could ideally do with a new set of piston rings as it does smoke a bit when hot (he believes that the rings he fitted in 2002 were not quite the right size). It also has the desirable option of power steering which makes low speed manouevring a doddle.

Looking smart in Old English White with a red leather interior and excellent brightwork, the car comes with the aforementioned history file, the original green log book, modern V5C and 19 old MOTs back to 1989. It also comes with its original tool kit and radiator muff plus an original padded cover for the dash top, this apparently being an option for the more safety-conscious customer.

Ready to enjoy right away with an MOT until April 2017 and very sound underneath, it can be gradually improved over time as desired and looks excellent value at the modest guide price suggested.