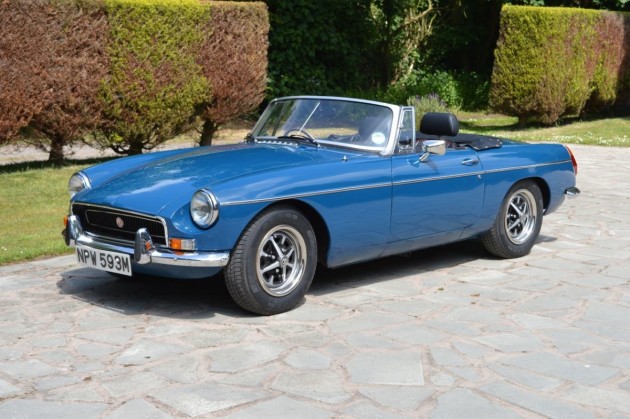 Although its engine might essentially have been that of the ‘A’, MG’s more rugged looking ‘B’ of 1962 introduced an all-new body design in line with modern monocoque construction techniques.

First produced in roadster form, a coupe followed in 1965. The convertible was a strong seller right from the start, offering sporting looks, decent handling and respectable performance from its 95bhp, 110lb/ft four-cylinder engine. In ’65, the model gained a stronger five main bearing engine (up from three) and, in ’67, synchromesh on all four gears when ratios were also improved.

Probably the easiest classic car to own thanks to the abundant supply of new parts and the model’s inherent reliability, they also offer a fair turn of speed and a fast cruising-gate thanks to the optional overdrive unit as fitted to this Roadster in the sale today.

This tax exempt 1973 model came into the vendor’s hands in 2012 as a very genuine rust-free car with scruffy paintwork. He comprehensively stripped it down to the bare metal, including the engine bay, and finding everything in order, had it professionally repainted in the correct shade of blue. He advises us that the original spot welds appear to remain in place, even around the vulnerable wheel arches, indicating what a sound car it is.

It was then put back together with a new clutch, replacement seats, door cards, carpets and a new hood. Originally specified with the desirable overdrive, it also has a rorty stainless exhaust which sounds a treat, the car being fitted with a new set of tyres at the same time.

Since completion, it has covered barely 500 miles, the owner intending to put a fresh MOT on the car in time for the sale. This fine example must rank as one of the nicest MkII MGBs we have seen.