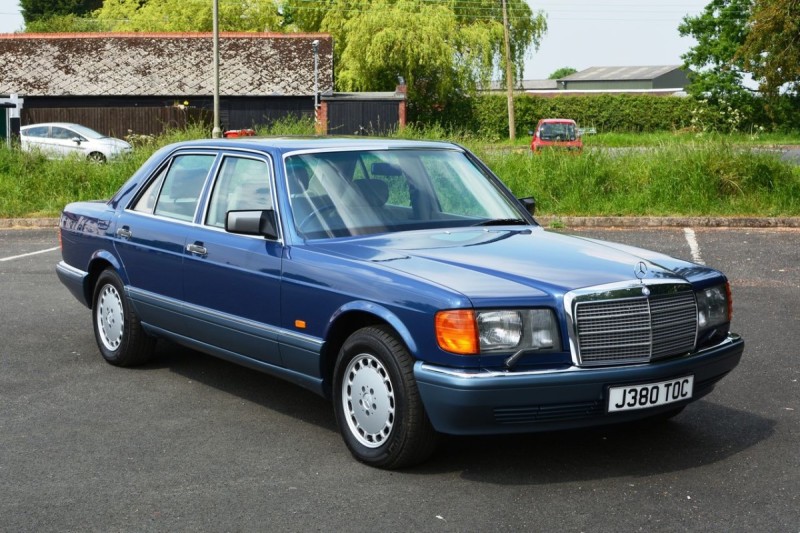 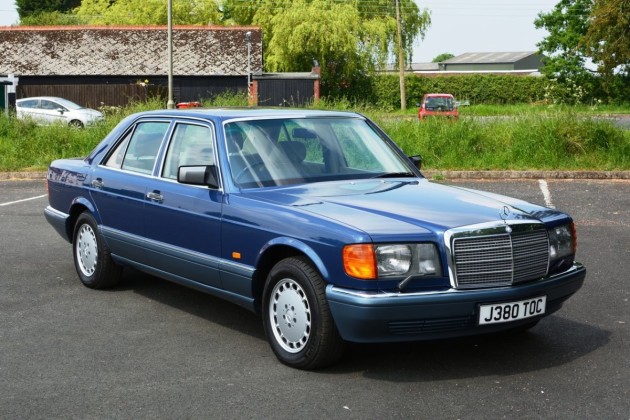 Mercedes-Benz knew they couldn’t be too radical with their replacement for the stupendous W116 S-Class. The car had already established itself as the world’s best-selling luxury saloon throughout the 1970s, however its prodigious weight and thirst were starting to be noticed and it was deemed necessary for a thorough ‘makeover’.

Enter the W126, a masterclass in automotive engineering which remained in production for almost 13 years and kept the German giant firmly at the top of the luxury car tree both in terms of volume and quality. Unveiled at the 1979 Frankfurt Motor Show, the body was smoothed off in the wind tunnel and thanks to an extensive weight reduction programme through the use of alloys, fuel consumption was reduced by at least 10% on all models with the added benefit of an increased top speed.

The S-Class four-speed automatic gearbox (also used in the Porsche 928) was equipped with a ‘topographical’ sensor capable of monitoring the car’s position and incline, as well as throttle pitch. The transmission could then reduce acceleration on a downhill and maintain position without the use of the brake pedal.

From 1986 anti-lock brakes were fitted as standard and the big saloon was subtly redesigned, becoming even smoother externally to improve both economy and performance. From 1985 a new 3-litre six-cylinder engine was introduced for the mid-range 300SE/SEL saloons. With 185bhp and 192lb ft on tap, the 300 was capable of reaching 60 in approximately 10 seconds with a top speed of 130mph.

Dating from the last year of W126 production, this stunning 300SE benefits from all the improvements that were made to the model before it was replaced by the far less impressive W140 range in late 1991. According to the V5C the car has had just one owner from new, the original purchase invoice showing that he bought it from Gerard Mann Mercedes of Birmingham at a cost of £32,527 in January 1992.

Since then the car has only covered some 82,600 miles and has always been impeccably maintained as the impressively large history file demonstrates, virtually all the work being carried out by Mercedes main agents. The service book is stamped seven times up to 41,378 miles in October 1999 with many bills to show subsequent upkeep, the last service taking place at 82,507 miles in February this year. Virtually all the old MOTs are also present to warrant the mileage and the current MOT runs until February 2017.

For the last few years the car has been in the custody of Mercedes Retail Group where it has been used as a ‘classic show car’ in various dealerships to demonstrate the heritage of the Stuttgart brand to the customers of today. Needless to say it was chosen for this role thanks to the exemplary nature of its condition – as you can see in the photos, it looks so good that you can scarcely believe it is almost 25 years old and has covered even 1,000 miles let alone over 80,000.

The Nautic Blue coachwork is virtually flawless as is the beige leather interior and the 15” alloy wheels which are shod in a matching set of quality Michelin tyres. All the electrics still work perfectly including the central locking, electric windows, sunroof, steering column and the original Blaupunkt Verona stereo. In short, you will not find a better 300SE anywhere and you may struggle to find a better example of any classic Mercedes.

Supplied with the aforementioned history file, all its original handbooks and two sets of keys, this stunning luxury limo needs nothing other than a proud second owner behind the wheel and would be an ideal show car that would grace any Mercedes collection.