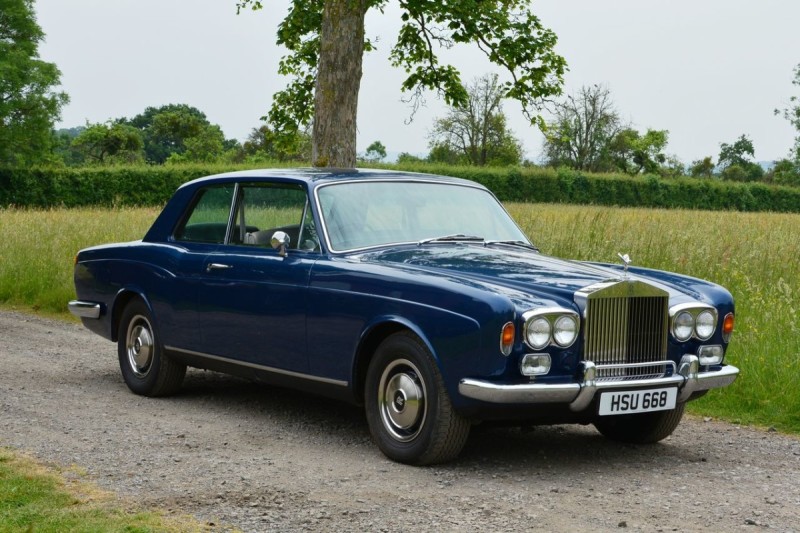 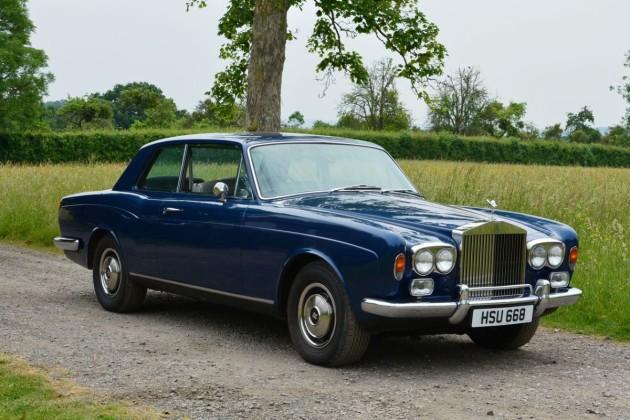 Launched in 1971 as Rolls-Royce's coupe version of the Silver Shadow, the Corniche was a superior car to the saloon on which it was based.

With fabulously elegant 'Coke-bottle' styling by John Blatchley, each and every one was hand built by Mulliner Park Ward in a necessarily lengthy process that took all of 20 weeks and resulted in a price some 50% higher than the standard Silver Shadow. Only the very finest materials were used including Wilton carpeting, Connolly hide and the best burr walnut veneers, giving these cars a level of quality and glamour that surpassed that of the saloons.

Engine power also went up by 10% increasing the top speed to 130mph with acceleration to match – 0-60 in 7.9 secs. Tweaks to the suspension and steering geometry gave a sportier ride and a special low-loss exhaust and new dashboard were also adopted. A three-speed Turbo Hydramatic 400 automatic transmission was standard, with independent suspension all round, self-levelling at the rear. Four wheel disc brakes were specified, with ventilated discs added for 1972.

The Corniche was progressively developed over time, gaining features like split-level air conditioning, rack-and-pinion steering, Bosch fuel injection and self-levelling rear suspension, along with a minor restyling in 1977. Reassuringly exclusive, only 1,090 Corniche coupes and 3,239 convertibles were made before the Corniche II came along in 1988, production of the convertible model soldiering on as the flagship model in the Rolls-Royce range until 1996.

First registered in January 1974, this stunning Corniche has covered only 66,000 miles to date with a good history file to warrant this figure including two service books that are stamped 15 times up to 62,446 miles in March 2014, all but the last at Rolls-Royce main agents, plus numerous supporting invoices.

Earlier in its life the car had been fitted with a Harvey Bailey handling kit, a well-known upgrade which transforms the driving experience and means that this weighty coupe can be hustled down the lanes with remarkable alacrity, as we discovered when we were allowed a lengthy test drive on the occasion of our visit. The combination of effortless thrust and sure-footed poise is so rewarding that it has to be experienced to be fully appreciated. Indeed it proved so intoxicating that we were most reluctant to hand back the keys, our enthusiasm being fully endorsed by Nick Terry who agreed that it was one of the best-driving Corniches he had ever experienced.

Having spent quite some time under the car, he also affirmed that it was as good underneath as it was up top, commenting that it combined the elegant looks of the early slim-bumper model with the handling prowess of the later cars, also bringing to our attention the rev counter in the dash, an option rarely specified on any Rolls-Royce but a welcome addition for the keen driver.

At the risk of sounding like a sycophantic period road tester, it is hard to convey just how special this car feels to drive or be driven in and we can honestly say that the pictures do not do it justice - the elegance of its lines, the opulence of its mellowed interior and the silken nature of its progress combining to produce a feel-good factor that modern cars can only dream of.

Complete with all its original handbooks, the aforementioned history file and an MOT valid until April 2017 with no advisories recorded, this is about as good as motoring gets. If only auctioneers got paid more…