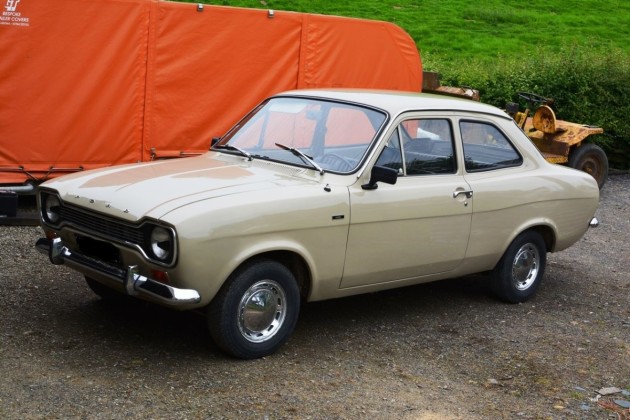 Launched in 1968 to replace the Anglia, the Escort soon became Britain’s best-selling car, with over 2 million sold by the time it was replaced by the MkII version in January 1975.

It was initially available only as a two-door saloon with either a 1.1 or 1.3-litre Kent Crossflow engine. Blessed with excellent handling characteristics, the MkI Escort went on to become one of the most successful rally cars of all time, remaining popular to this day within the now burgeoning classic rally scene.

This particular Escort 1100 De Luxe was supplied new to Portugal in January 1971 and has spent its whole life in those sunny climes, hence the remarkable state of preservation today. We are told that it had just three owners in Portugal, the last of whom kept it for many years and was an enthusiastic member of the local Escort Owner’s Club (hence the various stickers on the car).

We are also informed that the 64,800kms on the clock (40,300 miles) is genuine, although there is no documentary evidence to substantiate this. It certainly appears to be in good order throughout with no signs of any significant repairs or restoration either above or below, which is pretty much unheard of with UK cars that have been subject to decades of salty winter roads! It even has the opening front quarter-lights which are also rarely seen on UK cars.

Driven all the way from Portugal to England earlier this year with no problems whatsoever, it has since been UK registered as MCY 386J and comes with period aluminium number plates with raised plastic letters although these had yet to be fitted at the time of our visit. It also has an MOT until 24th April 2017 with no advisories recorded, a Portuguese MOT valid until January 2017 and all the import paperwork.

Perfectly useable as it is and easily converted to RHD if desired, it would also be an ideal base for conversion into a historic race or rally car.