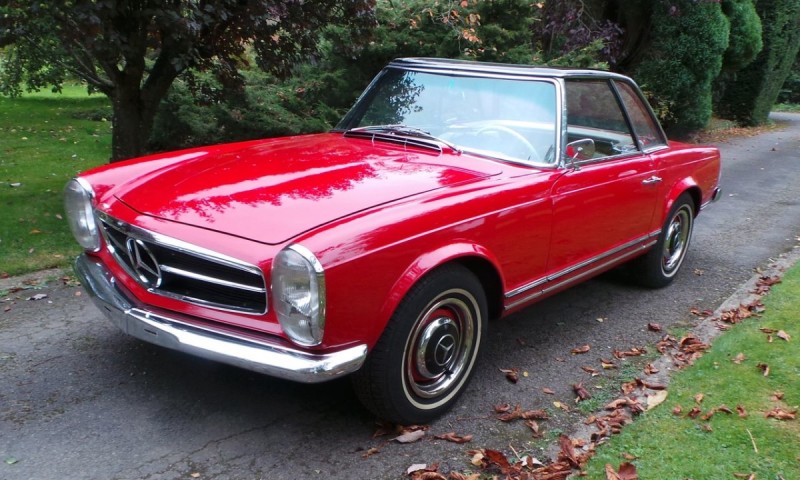 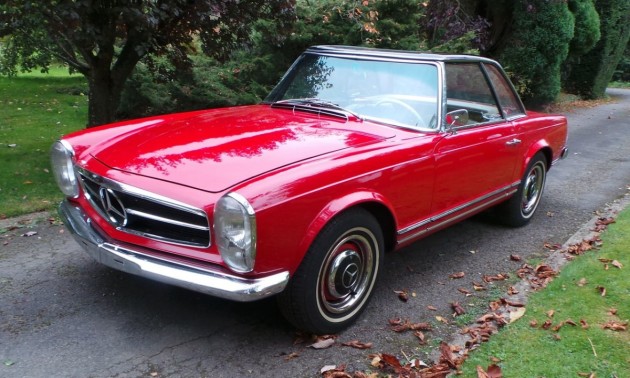 THIS CAR HAS NOW BEEN WITHDRAWN. APOLOGIES FOR ANY INCONVENIENCE CAUSED

In the late 1950s Mercedes-Benz were making two sports models, the gorgeous if rather over-bodied 190 and the outrageous autobahn-storming 300SL.

After an abortive programme to improve the 190’s performance, it was decided that they would replace both models with just one car. Developed from the new 220SE saloon platform, and using its sweet six-cylinder fuel-injected 2,308cc engine, the new W113 230SL was the first sports car to use front and rear crumple zones and was very elegantly styled by Paul Bracq.

A sophisticated removable hard top turned the roadster into a very convincing coupe, the hood folding out of sight into an area behind the seats under a hinged cover. The distinctive hard top had an unusual dished roof for added strength which was to become the signature feature of the ‘Pagoda’ as it was quickly dubbed.

Available initially in manual form only, an automatic was added in late 1963 which suited the car particularly well. Power output eventually increased from 150bhp to 170bhp in the last of the line 280SL, the W113 being replaced by the updated R107 SL in 1971. Suspension was by double wishbones and coil springs at the front, with a coil-sprung swing axle at the rear. All cars had front disc brakes (and rear on the 280) with power steering from 1964 onwards, and all models were capable of over 110mph.

This 1965 230SL Automatic is a European spec car that has the desirable options of power steering and a rare third seat in the back. It has spent the last 21 years in Norway where it was restored in the mid-1990s. The vendor states that the car has had minimal welding and is in excellent condition structurally with no evident rust. The paint, chrome and interior are also said to be very good.

The engine has been treated to a new timing chain and properly tuned with all the valve clearances set (invoices on file). It comes with both hard and soft tops, the latter in 'as new' condition. New tyres have also recently been fitted and the car is said to drive well with an MOT until October 2016.

Although the car has not yet been UK registered, all import duties have been paid and it retains a Norwegian Certificate of Title so getting it registered here will be no more than a bureaucratic exercise and the payment of the £55 fee.

One of the prettiest roadsters ever made, the Pagoda SL is also superbly well-built and is one of those rare classics that you can genuinely use every day. A blue chip classic that will always be in high demand, prices for right-hand drive SLs have rocketed in recent times and this smartly presented left-hooker could yet prove a shrewd investment at the sensible guide price suggested.