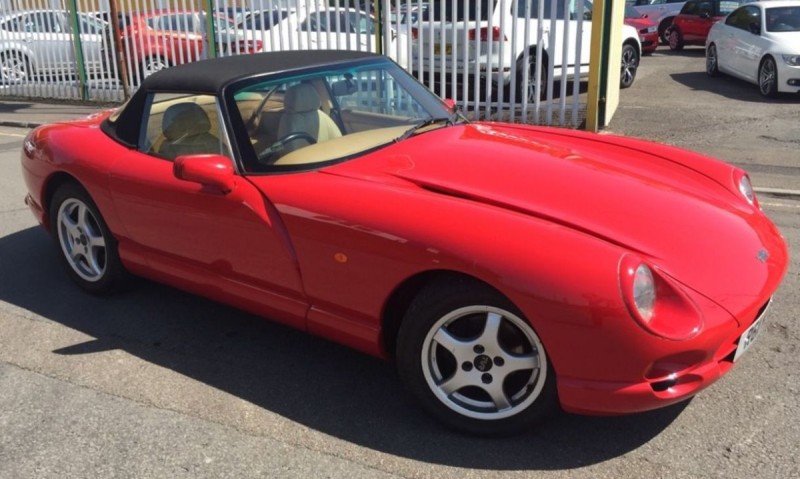 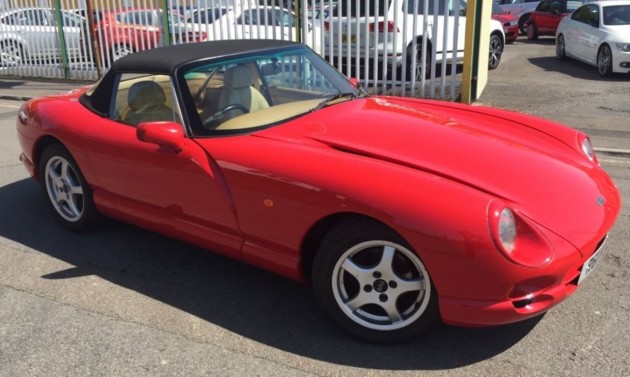 Founded by Trevor Wilkinson in Blackpool way back in 1947, TVR made its first cars in 1949 powered by 4-cylinder engines from Coventry Climax, BMC or Ford.

In the 1960s and ‘70s a switch was made to V6 engines but the real glory days came in the 1980s and ‘90s when, under the stewardship of Peter Wheeler, TVR adopted tuned Rover V8 engines slotted into beautifully sculpted fibreglass bodyshells. Lightweight and powerful, these were fantastically exciting sportscars which eschewed modern technology like traction control and ABS brakes in favour of old school driving thrills.

Launched in 1992, the Chimaera was typical of the breed with a 240bhp 4-litre V8 that could hurl it to 60mph in 4.9 seconds on its way to a top speed of 152mph. Intended to be the long distance tourer of the range, it used the same backbone chassis as the more hardcore Griffith but with slightly softer suspension and a much larger boot that could comfortably swallow the luggage of two people.

Powerful disc brakes at each corner kept everything under control while suspension was independent all round with unequal-length double wishbones and coil-over gas dampers assisted by anti-roll bars. Icing the cake was the spine-tingling exhaust note which rose to a brutal howl at high revs and is guaranteed to induce a manic (and addictive) grin on the face of anyone privileged to hear it.

Their dedicated customer base were soon demanding more power, TVR obliging with a 4.2-litre, 4.5-litre and eventually a 5.0-litre engine option, all based on the tried and trusted Rover V8 powerhouse. The 4.5-litre version as offered in this example developed 285bhp, enough to complete the dash to 60mph in a mere 4.7 seconds on its way to an Autobahn busting 160mph top speed.

This 1998 model, in striking red with beige leather upholstery, left the Blackpool factory destined for Japan. Repatriated in 2007 with 27,570 kms on the clock, its new mph speedometer reads just 4,250 miles making the combined total a shade under 21,500 miles from new.

The vendor has attended to a few minor cosmetic improvements to the interior, including a re-veneered dashboard and some minor renovation to the driver’s seat squab, the car remaining in lovely condition, reflecting its low mileage.

Due to carry a fresh MOT in time for the sale, this nicely spec’d 4.5-litre example needs nothing more than a new owner to have their spine well and truly tingled!