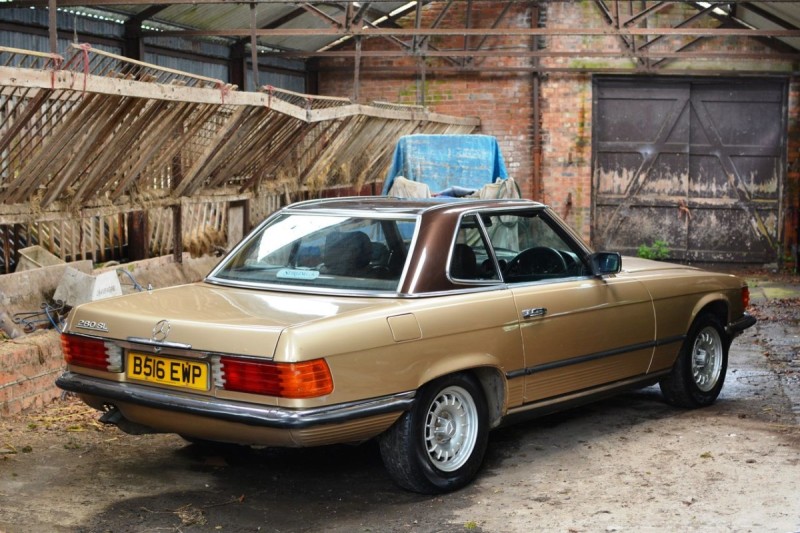 Bullet-proof reliability, bahn-storming performance and timeless good looks – if any car can be called an instant classic, then this is surely it.

Produced from 1971 to 1989, the Mercedes-Benz W107 SL series was a massive hit when new and continues to be highly sought after to this day. Made in the days when Mercedes still deserved its reputation for outstanding build quality, the cars came in a wide range of engine sizes from 2.8-litre sixes to 5-litre V8s.

It may have been the baby of the SL range, but the 280 was still a supremely capable motorcar with an excellent blend of performance and economy from its smooth straight-six engine. Top speed was 125mph with the 0-60 dash being covered in a respectable 9.6 seconds.

Supplied new by Howells of Worcester in January 1985, this smart 280SL has had just three local owners from new and has covered less than 83,000 miles to date. Always properly maintained, it has 12 stamps in the service book up to 70,315 miles in 2008 plus various invoices for subsequent maintenance including a £555 check-over in May this year when a new battery was also fitted and a new MOT obtained, since when the car has only covered a handful of miles. A set of new tyres were also fitted less than 1,500 miles ago.

In the current lady ownership since 1990, it has always been pampered and kept garaged during her 26-year ownership, and is such a good-looking example that the lady owner has lost count of the number of times she has returned to the car to find ‘if you want to sell this car’ notes on the windscreen. Only reluctantly for sale because the vendor has now reached the age when she has been advised to give up driving, it comes with all its original handbooks, a hard top and a soft top (the latter believed to be in good condition but unused for several years).

A most handsome car in all respects, this low mileage cracker, from long-term ownership, could be turned into a real show-stopper with relative ease, the only areas needing attention being some minor scuffs to the paintwork here and there and a couple of localised spots of minor corrosion. It looks excellent value at the sensible guide price suggested and is sure to give its proud fourth owner a great deal of pleasure over the coming summer months.