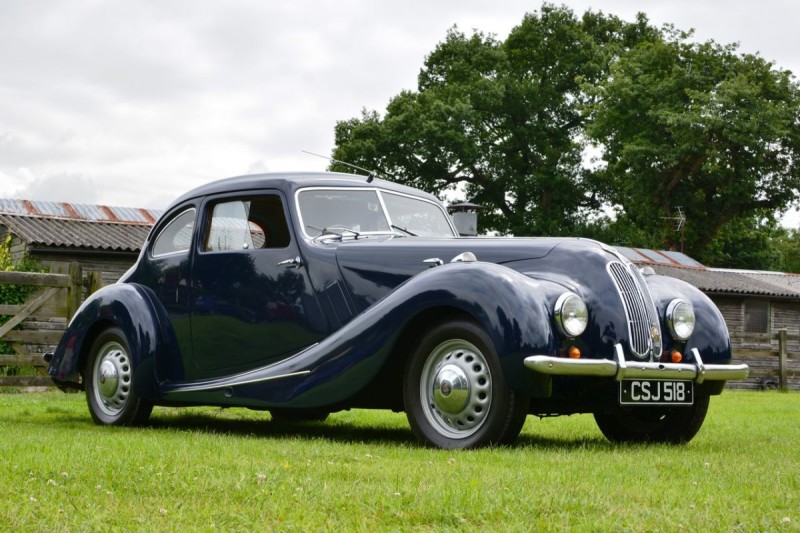 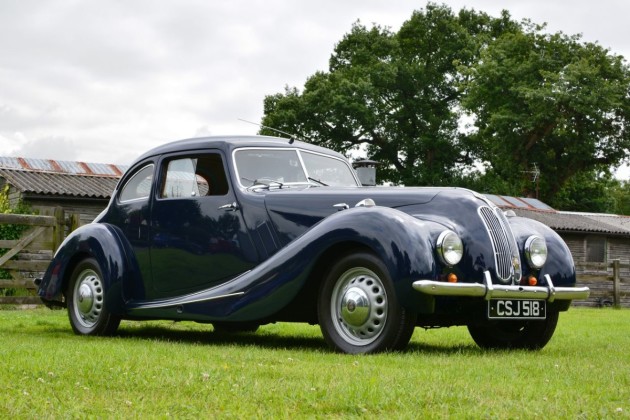 The Bristol Aeroplane Company had been manufacturing airplanes and engines since 1910 but turned its thoughts to car manufacture in 1944 to ensure peace-time employment for its workers.

As part of Germany’s war reparations, Bristol obtained a set of blueprints and plans which had been drawn up by BMW in 1939 to update their own model range. The first fruit of this windfall was the 1947 Bristol 400 which used the best features of three outstanding pre-war BMWs, namely the engine of the 328, the body of the 327 and the chassis of the 326. Modified by Bristol’s own engineers to their own exacting aircraft industry standards, all the parts came together beautifully and a most elegant sporting saloon was born.

The six-cylinder 2-litre engine featured an ingenious cylinder head design incorporating hemispherical combustion chambers and inclined valves without recourse to overhead or twin camshafts. Machined from the highest quality materials, it produced 80bhp and could propel the car to a top speed of 95mph with acceleration to match.

To keep weight down, boot, bonnet and doors were in aluminium. Suspension was independent at the front with a transverse leaf spring, and a live axle at the rear with torsion bars. The gearbox was a four-speed manual with synchromesh on the top three ratios and freewheel on first, quite a novelty at the time. The 400 had a fair degree of competition success and successfully completed the Mille Miglia in 1949.

Exact production figures are uncertain but it is thought that perhaps 420 examples were made between January 1947 and December 1950, a fair few of which went to Australia. Today perhaps half this number are thought to survive worldwide, fewer than 60 of which are currently registered with the Bristol Owners' Club, making them a very rare sight on the roads.

First registered in July 1948, this particular 400 is one of the earlier models that still had the spare wheel inside the boot rather than externally mounted as on later versions. According to a note on file, the car was first owned by a Capt George Cousins, ‘Tory Agent Portsmouth’ and although nothing is known of the early history of the car, it does have a very extensive history file from 1964 onwards, an old green log book showing that by 1964 it was owned by a Dr Audrey Vera Fox of Downend, Bristol.

From 1965 to 1967 it was owned by a Richard Davey of Bitton, Glos, being acquired by a Peter Woodward of Iver, Bucks, in April 1967 who was to keep it right up until 2008 when it was sold to Bristol dealer Brian May of Birmingham from whom the current keeper acquired it in 2009. For most of its life it was registered as GOT 12, a number which it sadly lost about 10 years ago (and which now adorns a rather less classy 2009 Citroen C3 Picasso).

During Davey’s brief ownership the car was repainted from grey to Valentines Midnight Blue and the engine was fully rebuilt with new pistons, crankshaft etc, the mileage at this time being around 88,500. A senior legal adviser at Hawker Siddeley, Woodward used the car frequently and looked after it meticulously during his 41-year ownership with many bills on file from Bristol Cars of Filton and Anthony Crook Motors of Chiswick plus a notebook detailing all expenditure up to 141,964 miles in May 1976. In January 1970 at 110,434 miles the block cracked and a replacement engine was fitted (now 400-85A-1254, originally 400-85A-1290).

From 1976 onwards there are many bills for ongoing maintenance, marque specialists Spencer Lane Jones keeping it in tip-top order from 1999 to 2008 and commenting in a letter dated 19th November 1999 that “the car starts, goes, steers and stops remarkably well. In fact it is a real ‘flier’ compared to most 400s”. The last major service was carried out 1,000 miles ago by SLJ in February 2008 at 152,317 miles.

As late as 2004 the car was still being entered into concours events, coming third in class at the Bristol Owners’ Club Annual Concours D’Elegance in September of that year. Pleasingly the car retains its original Radiomobile 100 long and medium wave radio which was fully overhauled in July 2005 by Vintage Radio Services of Bristol at a cost of £225.

Kept in storage as part of a large private collection since 2009, the car has not been on the road these past eight years but has just been partially recommissioned in time for the auction, the engine reportedly running beautifully although we are advised that the brakes will need attention before it can safely be used on the road.

Only reluctantly offered for sale due to imminent loss of storage, this rare and handsome sporting saloon looks excellent value at the sensible guide price suggested and should amply reward any further recommissioning works yet required.