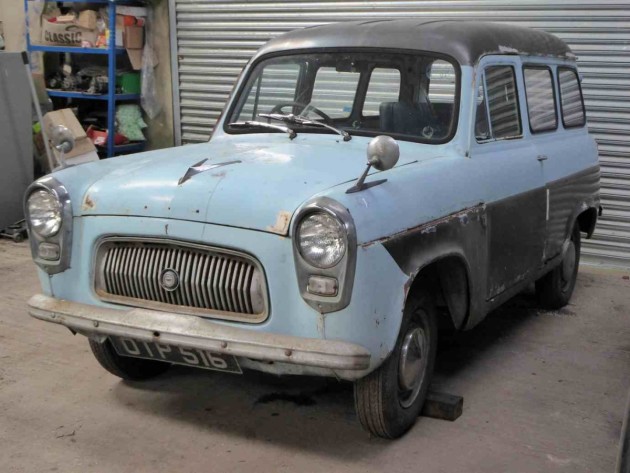 Launched in 1955, the Ford Escort Estate and its commercial variant, the Fordson Thames 300E were based on the contemporary Prefect/Anglia 100E saloon and shared the same monocoque construction, coil independent front suspension and Girling hydraulic brakes.

They were both powered by the same 36bhp 1,172cc side-valve engine mated to a three-speed gearbox which gave it a top speed of 70mph with 33mpg economy. The two-door bodywork had considerably shorter doors than the saloon to optimise interior space, with a horizontally-split tailgate in the case of the Escort and conventionally hinged rear doors on the Thames.

Apart from the rear door treatment and lack of rear seats and windows on the Thames, they were hard to tell apart. Sales of the Escort remained a bit of a struggle, principally because the Thames version was exempt from the draconian Purchase Tax imposed on private cars at the time.

The monetary saving was sufficient to persuade most customers to get out the tin-snips and fit rear windows themselves. Once installed, a trip to the scrapyard to find a suitable rear seat, or if you were posh, a visit to your Ford dealer to buy a rear seat kit from an Escort, saved you literally months of salary.

This 1957 Thames 300E seems to have had just this treatment, including a two-tone paint job to further distance it from its commercial origins. It has remained barn stored for a number of years, its odometer showing 38,000 miles which may or may not be correct.

We can confirm that it is a matching numbers vehicle and that the engine has run recently, albeit with a temporary fuel supply to the carburettor. It comes with an old style V5, its current V5C confirming that it has only had two previous owners and that the registration number OTP 516 remains transferable.