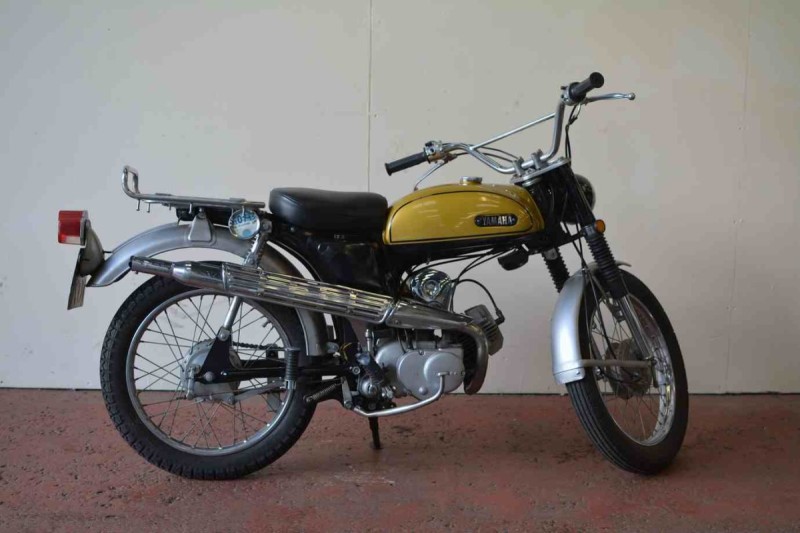 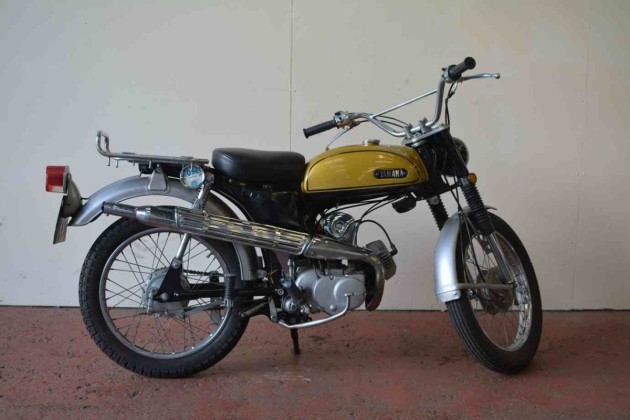 After the success of the YL1, Yamaha wished to replace this with a cost-effective but equally quick single-cylinder model, this being the YL2.

In November 1968 a trail version of the YL2 was issued called the L5T, this featured a trail style handlebar, sump guard, upswept exhaust and ‘Trailmatic’ gearbox. This was essentially a three-speed gearbox with a dual-ratio system operated by a lever on the engine effectively giving an off-road low-ratio selection with a top speed in the region of 35mph, and a high-ratio selection for road use and a top speed of approximately 60mph.

Mudguards on this trail model were now chrome, while electric start and 12 volt electrics were all standard features Never officially imported to the UK, the quirky YL2 shows many of the design features that went into the much loved FS1E moped that was more familiar on the UK roads.

The pretty and rare model here is a 1969 100cc L5T Trailmaster in a fetching shade of period gold. A matching engine and frame number machine, it is showing 4,905 miles on the clock and was reputedly stripped, painted and renovated a few years ago and has only covered around 200 miles since.

Although there are currently no documents with the bike, an online check shows that its last MOT expired in August 2015 and that it was first UK registered in February 2011 so it was probably imported from overseas at around that time. The new owner will have to apply for a replacement V5C in the usual way.

This smart looking dual-purpose machine has clearly been well looked after and is being offered here at no reserve so the highest bid takes it.