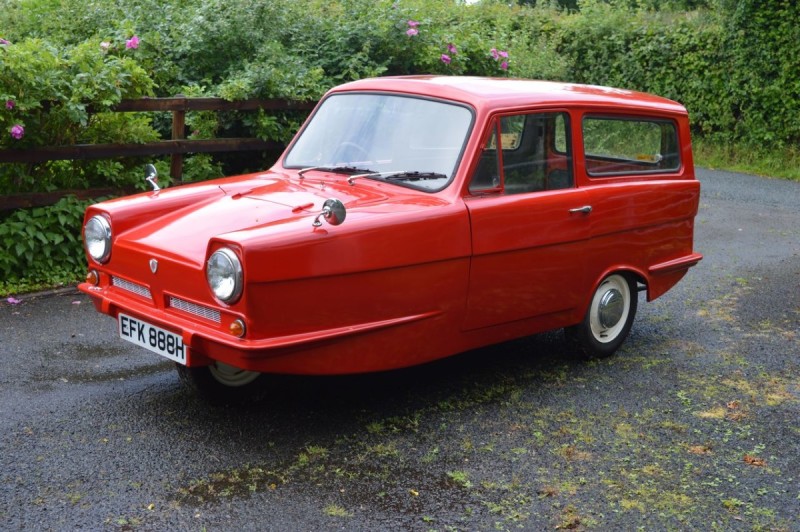 Never has a vehicle been so inextricably associated with a popular television show than the scruffy yellow Reliant three-wheeler driven by Del Boy and Rodney Trotter in the long-running BBC sitcom Only Fools and Horses.

The van is frequently and incorrectly referred to as a Reliant Robin, but is actually a Reliant Regal Supervan. This most unlikely of motoring icons now enjoys something of a special place in British culture as a symbol of lovable wide boy eccentricity.

The original Regal car was launched in 1953 along with a light-commercial version with a side-hinged rear door which was marketed as the Regal Supervan. Such was the success of these small vehicles that in April 1968, a year before BMC celebrated their two-millionth Mini, Reliant sales director TH Scott personally drove the 50,000th Regal off the assembly line at Reliant's Tamworth plant.

In August 1968, the Regal was fitted with the 700cc version of the Reliant engine which produced 30bhp. They offered a 21E version which was fitted with 21 extras, items otherwise available as optional extras to the standard car. These extras included a spot light, a fog light, chrome plated bumper over-riders, sun visors, an oil gauge, outer wheel trims and metallic paint.

In 1973, after a production run of 20 years, the Regal and the Supervan were replaced by the Reliant Robin. The Trotters' original van from the TV series is now on display in the National Motor Museum, Beaulieu, but such is the attraction of the show that most surviving Supervans have been painted yellow and are driving around in 'Trotters Independent Traders' livery.

Not this one though! This 1969 example was purchased by the vendor’s late husband in 2008 from their builder who had last used it in 1994. He had acquired it in 1984, putting it to good use as a general works vehicle until retiring from driving.

The bodywork was removed, the simple chassis getting a thorough overhaul and coat of paint before the body was put back on the car, an operation appropriately undertaken by the team of painters and decorators who were working on the house at the time. The complete car was taken to nearby Bromyard for a coat of Post Office red paint and a set of carpets have been added to smarten up the interior.

Sold with a current V5C, MOT until June 2017, handbook and workshop manual, there is something very appealing about this quirky and cheeky British icon that automatically brings a smile to everyone’s face. Its last owner was sadly not able to enjoy the car as he would have wished, so it will be up to the new owner to fly the flag and take the long road ‘to Hull and back’ as Del Boy, Rodney and Albert did with theirs…