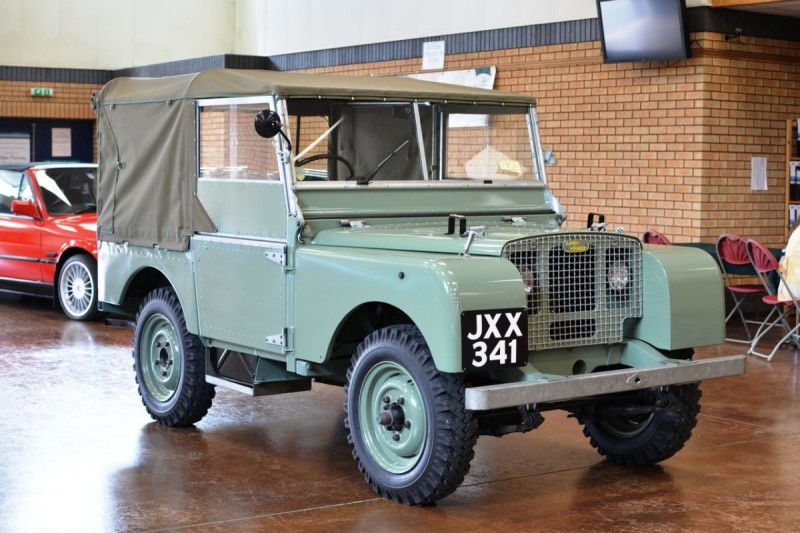 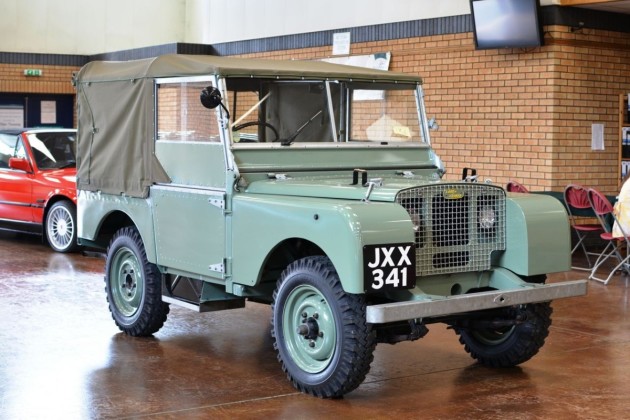 One of the longest-running success stories in motoring history, the iconic Land Rover was designed by Maurice Wilks and launched to the world at the Amsterdam Motor Show in 1948.

Until 1951 this ‘go anywhere’ marvel was only offered with an 80-inch wheelbase and a 1.6-litre petrol engine but a 2-litre unit was to follow in 1952. In early 1950, the lights moved from a position behind the grille to protruding through the grille. 1954 saw a big change as the 80-inch chassis was extended by 6-inches and a 107-inch pick up version was also introduced, all models sharing a sturdy box-section ladder-frame chassis design.

The most desirable of all Series Land Rovers are the earliest models with their simple Butler headlights hidden behind the grille. Their bulkhead mounted sidelights, semaphore indicators and spade-shaped seats are further give-aways that a Series 1 comes from the first few years of manufacture.

This stunning example was built as a 1950 Model Year, leaving the factory on 5th December 1949. It was originally sold to the Ministry of Supply, its history during the intervening years remaining somewhat of a mystery. Rescued by John Craddock Ltd, it had been used as a trials vehicle, a two-litre engine having been fitted sometime in the 1970s.

Purchased some years later by the vendor as a restoration project, work started in 2010, the vehicle being completely stripped to the bare bones. The objective was to restore it to perfection, using as much of the original as possible and as many New Old Stock components as could be found.

The original chassis, bulkhead and axles were restored, along with the correct long-nose differentials. The original gearbox was also restored and the car was gradually and carefully built up with new springs, shock absorbers, track-rod ends, NOS bump stops and much more besides.

The bodywork was dismantled and the cappings re-galvanised. All necessary rivets were replaced with correct spec items finished by hand. Although originally Bronze Green, the vendor decided to paint the vehicle in light green to emphasise its early production status. The front wings and rear tailgate were replaced with new Keith Wadsworth supplied items.

The engine was stripped, checked and repainted, a new loom fitted and all of the correct instruments and switches carefully detailed, the vendor even sourcing a NOS speedometer and cable. A rare, brand new and unused column-mounted horn/dipswitch was also acquired along with NOS side lights and incredibly, a set of NOS spade seat backs still in their original packing cases.

Finally completed in 2014, the restoration was posted (and remains) on the Land Rover Series 1 Forum and has received over 20,000 visitors to date, the restoration also being featured in an expansive three page article in 'Classic Land Rover', a copy of which is on file.

The owner had been asked by Land Rover if they could use the vehicle at the opening of their new Birmingham showroom, a deadline which was duly met, the completed vehicle proudly sitting next to HUE 166, the prototype Land Rover at the launch.

It has subsequently won 1st prize in the concours at the ARC National event at Eastnor in 2015, followed by the David Bowyer cup for the best Series 1 a year later when the annual event was held in Sussex, a real credit to the quality of the restoration, especially as the vehicle had been driven to both events. In fact, the vendor has used it extensively, including trips to North Wales where it has been put through its paces and just this year, a three day adventure to Ypres in aid of the Dunsfold Collection.

Despite the mileage on the new speedometer now reading 5,517 miles, the car still looks like it has just left the factory for the first time, especially as the vendor has just fitted a brand new set of Lassa 600x16 tyres that have covered under 10 miles.

This concours-winning, well-known early Series 1 is available at a fraction of its restoration cost and must be about the best available anywhere. It is only being offered for sale because the vendor has managed to find an even earlier one dating from 1948.