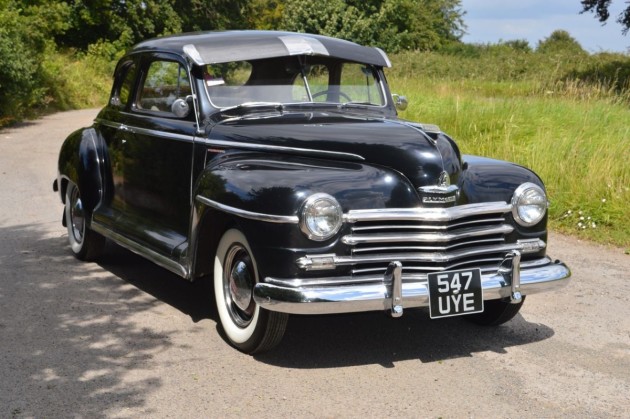 By the mid-1920s, Chrysler were concerned that they were missing a trick by not having a competitor in the budget, mass-volume end of the market.

The solution was to introduce a completely new brand of their own, which they did in 1928 with the Plymouth. Priced slightly above Ford’s new ‘A’ and Chevrolet’s Superior, they were more sophisticated than the cheaper opposition so didn’t have to fight for market share on price alone. By the late 1930s, Plymouth were the third ranking brand in the race for market share, offering a variety of body-styles which all shared a rugged side-valve straight-six 3,299cc engine.

The four-millionth Plymouth was delivered in 1941, although America’s sudden entry into World War II post Pearl Harbour meant that car production ceased completely at the end of January 1942, the firm concentrating on producing military hardware. The Chrysler group were slower than the rest to resume automobile manufacture post hostilities, a mere 770 cars leaving their factories in 1945.

Although the immediate post-war range boasted over 50 improvements, they were basically the same fayre as before, the trusted six-cylinder getting a boost in compression ratio to 6.6:1 which produced a lazy 95bhp. Their new 1946 models came in sedan or coupe form, with the more luxurious Special De Luxe adding a woody and convertible to the repertoire.

This fine and highly original 1947 Special De Luxe Club Coupe was ordered new by Cora Baier who lived in Detroit. The original bill of sale shows that she paid $1,257 with an additional $5.80 for rear bumper guards. It retains its correct owner’s handbook and service sheet and comes with a detailed list of owners which shows that Ms Baier kept it until 1962, by which time it had covered 67,000 miles.

It then migrated to Florida where it lived until 1993, the mileage having risen to 73,762 miles by the time it was passed on to three further owners in Jackson, Indianapolis and then Jackson again. The odometer reading had increased to 85,808 miles by 2013. The vendor, a regular visitor to Hershey, went to the event with the intention of buying a car to use in the UK. After failing to do so, he met someone in his hotel who pointed him in the direction of this beautifully original example which was duly purchased.

Since its arrival back in the UK, it has been serviced with a new coil, hoses and thermostat, while bills on file also show that it had a comprehensive brake overhaul in 2004. At some point it has been fitted with a taller than standard back axle ratio, making high speed cruising a pleasure and there is a comprehensive service kit in the boot, along with a spare head gasket and a pair of new shock absorbers yet to be fitted.

A change in circumstance has meant that this most impressive example is up for grabs, its correct and gorgeously original interior, nice chrome work and rust-free body making it a very tempting proposition. We were lucky enough to be allowed an extended drive when visiting to take the photographs. It certainly was a most impressive performer and has a street presence second to none.

Fully registered for the road and MOTd until July 2017, it has now covered some 86,700 miles from new and looks like a huge amount of fun for the modest guide price in the catalogue.