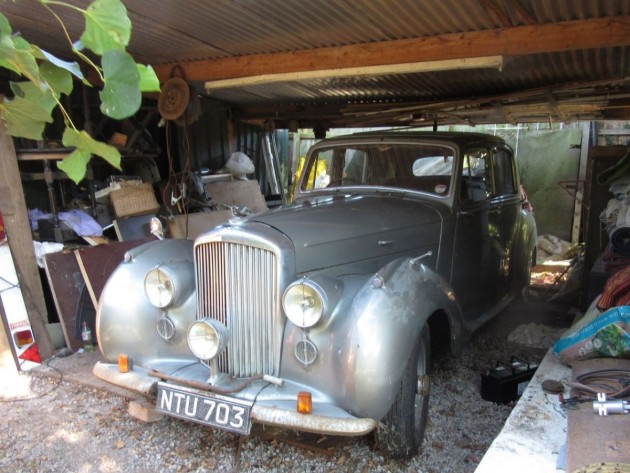 Beautifully built in the finest Bentley tradition, the stately MkVI made its debut in May 1946 after months of painstaking development to ensure that it would pass muster on the crucial export market.

For the first time ever at Crewe, the decision was taken to produce a standard model with an all steel body, thus doing away with the traditional handmade aluminium panels and ash frame of its predecessors. This enabled the firm to keep assembly of the car largely in-house although, with high volume aspirations, the body shells were farmed out to specialists Pressed Steel Ltd. in Coventry, the completed units returning to Crewe for painting, trimming and final assembly.

The chassis itself was a traditional cruciform structure with leaf springs at the rear and independent coils up front, a central lubrication system allowing oil to be applied to moving parts of the suspension from a central reservoir. Reassuringly powerful servo assisted drum brakes provided ample retardation.

Motive power came from a beautifully smooth 4.25-litre straight-six with twin SU carbs and an aluminium cylinder head, driving the rear wheels via a four-speed manual gearbox (floor-mounted to the right of the driver) with a single plate clutch. With a top speed of 95mph, the big saloon could hold its own with most sports car of the day.

The MkVI enjoyed considerable success both at home and abroad with some 5,200 cars leaving the factory before it was replaced by the largely similar R-Type in 1952. “Years of painstaking research and development with mechanical perfection as the goal show their results unmistakably. Smoothness and quietness and sheer quality are in the superlative," was how Autocar summed it up.

First registered in July 1951, this MkVI has been in the current ownership for 45 years and is showing just under 42,000 miles on the clock which is believed to be genuine although there is insufficient documentary evidence to warrant this. It had a bodywork restoration in the mid-1990s as documented by photos on file. It was in regular light use until 2005 when it failed its MOT mainly because the front brakes and the hand brake were below the required standard. It was then put into storage where it has remained to this day, the vendor always intending to get it back on the road but never quite getting round to it.

As you can see, time has taken its toll on the car which is once again in need of refurbishment although the engine still runs and the car rolls freely. Said to be complete apart from the radio and the spare wheel which both went missing some time ago, it is being offered here as a straightforward project. It comes with a set of five new tyres (yet to be fitted), sundry invoices and restoration photos, a V5C, old-style V5 and a copy of an older buff log book, various old MOTs and an original owner’s handbook.

Being offered here at a very modest guide price, it should amply reward the remedial works now required to return it to the road.