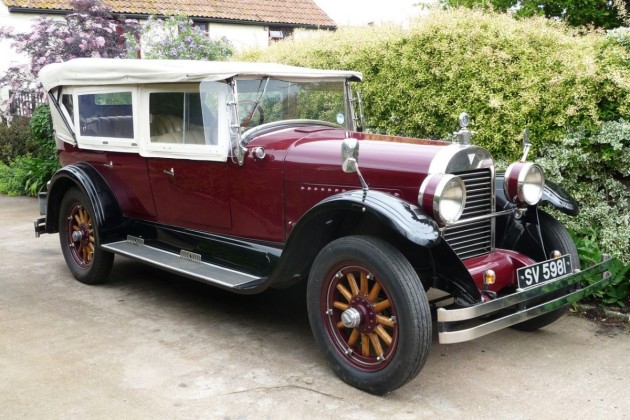 A consortium of eight Detroit businessman founded the Hudson Motor Car Company in February 1909, its president Roy D Chapin leading it to great prosperity in the first three decades of the century.

By 1925, Hudson, along with its new economy marque 'Essex' was in third place in the American auto manufacturing hierarchy behind Ford and Chevrolet. The splendid reputation of the Hudson was undoubtedly based on the magnificent range of Super-Six cars. These were large, solid machines with excellent performance from a 4.3 litre sidevalve straight-six engine which became known for its quality, long life and reliability.

Introduced in January 1916, the first Super-Six Hudsons immediately established themselves in long distance reliability trials. A new record of 5 days, 3 hours and 31 minutes was established in 1916 for the transcontinental run between San Francisco and New York. After an 8 hour rest, the car, a standard touring model with four passengers, then returned to San Francisco in 5 days, 17 hours and 32 minutes. Ralph Mulford next established a record speed of 102.53 mph at Daytona Beach on a sports bodied Super-Six in April 1916 and later a 24 hour record of 74.8 mph for 1819 miles in the same car. Mulford also set a record time at Pikes Peak of 18 minutes 24 seconds, the first of many successes by Super-Sixes at this historic ‘hill climb to the clouds’. Several Edwardian Super-Six racers have also recently appeared on the VSCC scene to great effect.

The second series car entered production in 1922 with an updated 4,736cc six-cylinder side-valve unit that developed a conservative 76 bhp at just 2450 rpm. The crankshaft was supported in four massive main bearings and carburation was provided by Hudson’s own splendid bronze side-draught instrument. A three-speed gearbox was more was coupled to a multi-disc oil-bath clutch, with shaft drive to a semi-floating rear axle. Rear wheel brakes were fitted along with wood spoked wheels with detachable rims, although wire spoked wheels of enormous size (34 inches diameter) could be specified for sporting cars. The quality of the Hudson could be judged by the demand for the cars, which varied in price in 1922 from $1,700 - $3,500 dollars depending on coachwork compared with only $400 - $750 for the contemporary Ford Model T!

This magnificent 1926 RHD example was purchased by the vendor at a UK auction in 1996. It had not long found its way to the UK from Western Australia and although in running order, was "not nice" according to the vendor. The owner of a significant collection of pre-war cars in the West Country, he commissioned his own workshop to completely strip and restore the car, a task which took several years. Nothing was left to chance, the body was removed and all chassis and engine components restored. The body was repainted in attractive maroon and black and the car retrimmed in magnolia leather.

Since completion it has served reliably as part of the vendor’s wedding fleet which is being thinned down to more modest proportions hence the Hudson's inclusion in the sale. MOTd until May 2017 and supplied with full weather equipment, this fine-quality full-size American tourer is ready for immediate use and can be enjoyed by all the family (and their friends!).