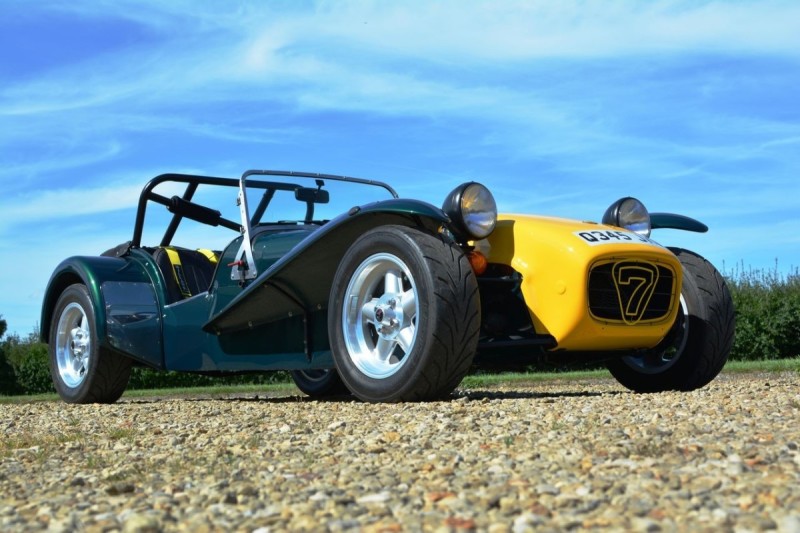 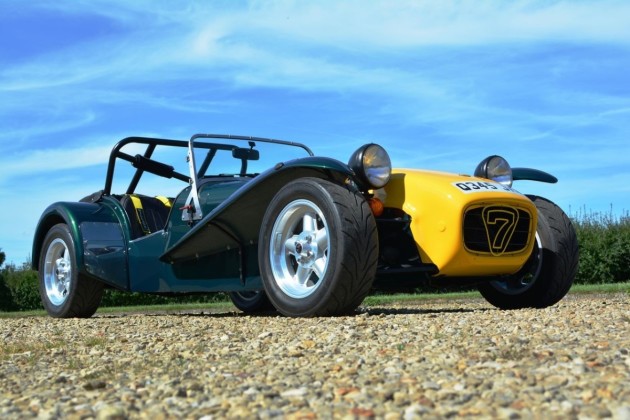 “For anyone brought up on driving traditional cars, the pared-back purity of the Caterham driving experience is difficult to describe. This is a car that never feels anything but electrifyingly vibrant, a sensory overload that is so ridiculously quick and responsive it feels hardwired into your cortex” – CAR magazine.

One of Britain’s best known and best loved small volume sportscar manufacturers, Caterham Cars began life in 1973 making faithful copies of the legendary Lotus 7 under a licence granted by Colin Chapman.
Right from the start the cars were offered in kit form to allow buyers to avoid new car tax in the UK. As with the original Lotus 7, the Caterham 7 featured a mixture of aluminium and GRP bodywork attached to a tubular steel chassis.

Early cars used the exotic Lotus Twin Cam engine but simpler Ford Kent units also proved popular fitments producing anything from 120bhp to 150bhp depending on the state of tune. By the 1990s the 2-litre Vauxhall HPC unit and the Rover K-Series in 1.4, 1.6 or 1.8 capacity became the backbone of the range. No matter what engine is fitted, given the extreme lightness of the cars (around 540kg) they all go like stink, sprinting to 60mph in under 6 seconds with go-kart handling and the most communicative chassis you could wish for.

First registered in June 1988, this stunning Caterham was professionally built by Riverside Motors of Sevenoaks using parts supplied by Caterham. It has had just three owners from new and has covered only 17,200 miles from build with lots of history to warrant this total.

Originally fitted with a Ford 1600 Crossflow engine, this was replaced in 1990 with a 1,700cc dry sump Lotus Twin Cam engine specially built by Giselle Racing Motors of Maidstone. The bottom half of the engine is based on the Lotus 711M block, crank, rods and flywheel with +.030 Powermax pistons, the whole balanced and tuftrided and fitted with Vandervel competition bearings.

The cylinder head is Lotus fitted with 1.620 inlet valves and 1.400 exhaust valves with race springs and retainers and lightweight steel cam followers. Camshafts are QED 450 ground from steel blanks with a .450 lift and relatively short duration. The compression ratio is 11.1 and carbs are twin Dellorto 45s. Documents show that it produces 156bhp at 7,000rpm with peak torque of 135.4lb/ft between 4,500 - 5,000rpm.

The rear axle is to Super 7 specification and it rides on 5-spoke Revolution alloys shod with a matching set of high performance Toyo Proxes tyres. The bucket seats are fitted with Willans race harnesses and it has a full set of weather gear comprising hood, sidescreens and tonneau cover, all in good condition.

Two years ago the car was totally dismantled and refurbished, including media blasted and repainted chassis, a full body repaint in BRG metallic with a yellow nose cone and all suspension parts renewed or refurbished, the whole process documented in many photos on file. The gearbox was also reconditioned and a new clutch kit fitted along with new starter ring gear and a new starter motor. It has only covered a handful of miles since the refurbishment and, as you can see, it remains in spectacular condition throughout.

Due to have a fresh MOT in time for the sale, this pocket rocket embodies the essence of pure driving joy and is about as much fun as you can have with your clothes on. Go on, you only live once…