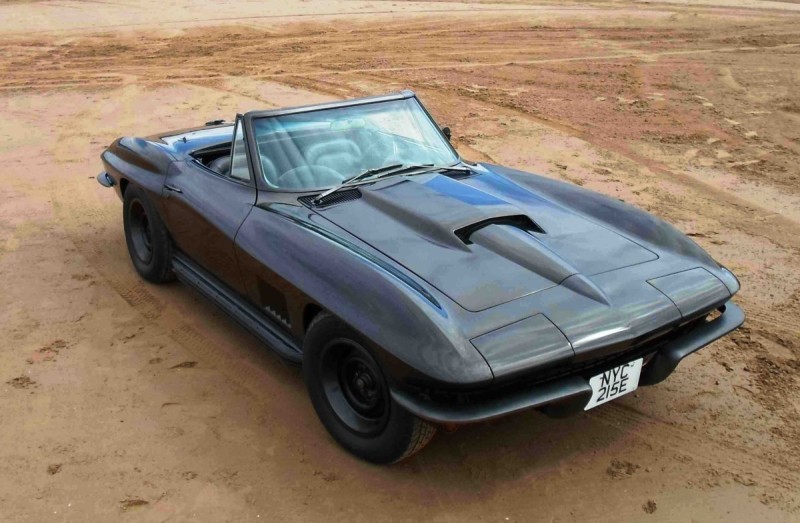 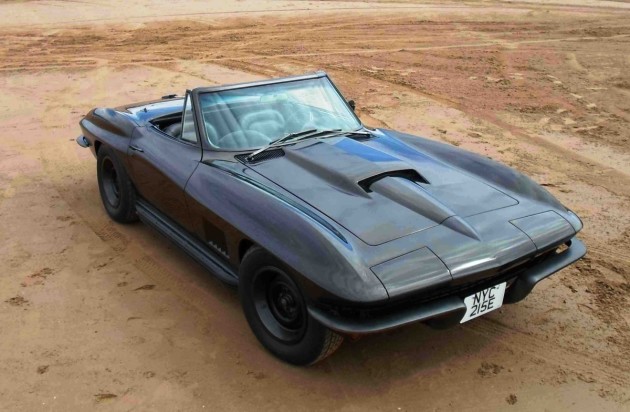 One of legendary stylist Harley Earl's most outstanding designs, the fibreglass-bodied Chevrolet Corvette was launched in 1953 and has remained in production in one form or another right up to this day. So far there have been seven generations, usually referred to as C1 (1953-62) through to C7 (from 2014 model year), all of which are quite different from each other in appearance.

Most sought after are the C2 versions produced from 1963 – 1967 which were largely designed by Larry Shinoda under the styling direction of Earl’s successor, Bill Mitchell. In true American consumerist fashion, the Corvette was restyled every year to make each new iteration more desirable than last year’s offering and to many, the pared back 1967 version of the C2, with its distinctive five-vent ‘shark gills’ on the front wings, is the most desirable of all.

This particular 1967 Corvette Roadster is especially interesting because it incorporates numerous styling tweaks copied from a show car that Larry Shinoda produced in 1966 to whet the public’s appetite for the forthcoming 1967 model, many of which proved too impractical to replicate on the production version that actually went on sale. These included exaggerated GRP bodyline creases, sharpened beyond practical production limits, and a dramatic air-scoop in the bonnet in order to accentuate the design - the latter being a feature that did make it into production on the 'big block' 1967 cars and was so much admired that many other Corvette C2 owners have since modified their own bonnets in the same style. Two show cars were made, a Coupe and a Roadster, both finished in black and devoid of exterior chromework and hubcaps to maximize the impact of the bodywork alterations.

Originally built at the St Louis plant in February 1967 and sold new via Home Motors of San Manto, California, this 427 Roadster had just two owners before the vendor acquired it in south Florida way back in 1984 at which point it still had only 43,000 miles under its wheels. Although the car was rust-free it was cosmetically tired after a long period in storage and in need of freshening up – hence the rationale behind the ‘Shinoda tribute’ modifications.

The 400bhp L36 ‘big block’ tri-power engine, transmission and California-mandatory smog equipment already in the car were carefully removed and stored, and an equally powerful high nickel content marine grade 454 capable of running on regular unleaded was installed in its place, thus retaining the car’s 12-second quarter-mile performance while preserving the originality of the components that had been removed (these being included in the sale if desired, although they will need to be collected from storage in Maryland USA).

Always kept garaged and only sparingly used during the vendor’s 32-year ownership, the car still has only 47,000 miles on the clock and is said to remain in very good order throughout and to be still capable of out-running most other cars on the road. Since arriving in the UK three years ago, it has been regularly waxed and detailed to keep the effects of our damp climate at bay, the vendor confessing that he spent hours cleaning it after recklessly driving it onto the beach at Western-super-Mare to take these photos!

MOTd until February 2017 with no advisories recorded, this deeply desirable and tastefullly modified C2 is eminently useable as is but could be converted back to original specification quite easily if desired, all the original components being either included in the sale (e.g. hubcaps and factory hard top) or readily available from suppliers in America. Even the bodywork modifications can be easily reverted to standard via the simple expedient of smoothing the sharpened GRP creases with sandpaper.