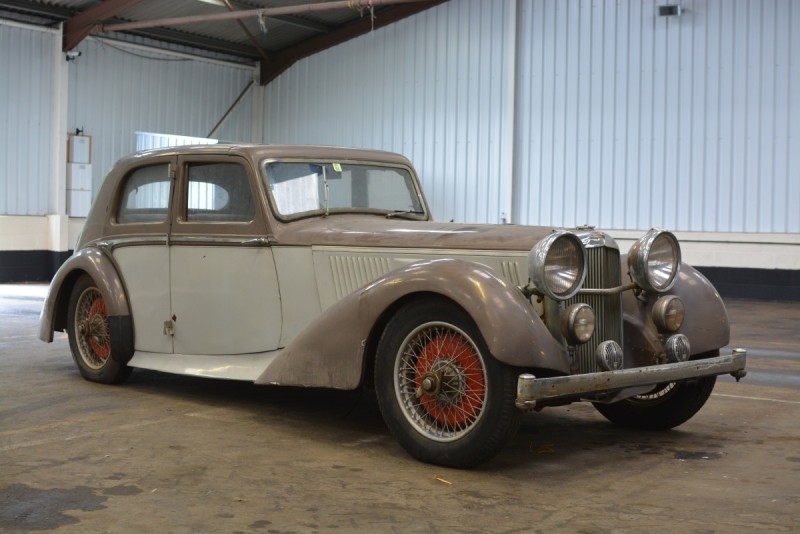 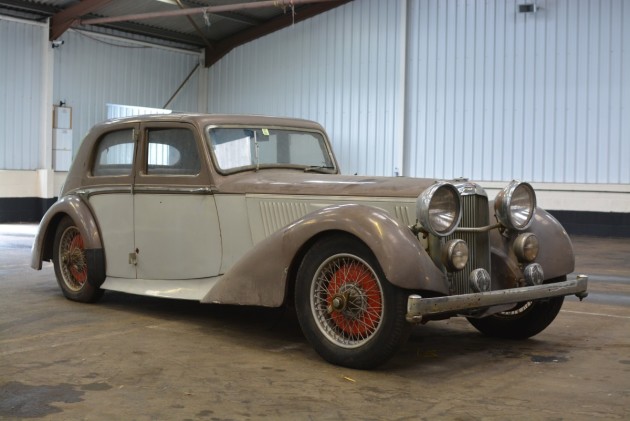 Fast and handsome with tremendous performance and a low, purposeful stance, the Alvis Speed 25 is the epitome of pre-war sporting elegance.

Beautifully made and bristling with technical innovations such as independent front suspension, all-synchro gearbox, one-shot chassis lubrication system, adjustable Luvax hydraulic shock absorbers and four-wheel servo-assisted brakes, the car was capable of a smooth and refined 100mph and is widely regarded as the finest Alvis ever built.

Announced in August 1936, the Alvis Speed 25 was given the new 3.6-litre engine, with seven main bearings and a fully balanced crank and flywheel, the silky-smooth unit featuring novel overhead valve-gear using multiple springs for each valve, triple SU carburettors and developed an impressive 108bhp. Despite weighing a hefty 36cwt, in Charlesworth saloon form (as here) it could charge to 50mph in just 10.4 seconds and cover the standing quarter-mile in only 20 seconds - remarkable performance for the time.

An outstandingly sophisticated and handsome car, it was also very expensive (stealing sales from both the Bentley 4.25 litre and Lagonda LG45), just 391 examples being produced before production came to an end in 1940.

This late model SC Charlesworth Saloon was first registered on 6th January 1939 and is reputed to have been used by a privateer in the 1939 Monte Carlo rally which took place later that month. Interestingly, it was not recorded as having been despatched from the factory until the very end of March, despite being registered at the start of the year – maybe returning to the works for rectification after the event or even having had some form of tacit works backing – who knows?

Fitted with four-door coachwork by Charlesworth (numbered 14613), its chassis plate confirms it as car number 19947, chassis number 14636 which was originally fitted with engine 15120, although this has been swapped with a slightly earlier unit from an SB model bearing the number 14893.

It has spent the last 36 years in a snug heated garage in Sweden, the owner having acquired it to join his large collection of Alvis cars. Somehow, recommissioning work never got underway, although the car was fired-up every few months until 2009 when the engine was partially stripped for attention. Work stalled and it has not run since, although we understand that it still turns freely.

The Alvis register lists its previous owners as the Hare family in Hexham from 1952. It then passed to Mr Ridley of Albrighton in 1968 who sold it to Mr Clark of nearby Dudley in 1983. At the end of that year, it was driven onto the ferry at Harwich and delivered to Norrkoping in central Sweden where it has remained with the Hennryson family ever since.

The original engine 15120 had been removed long ago and was seen next to the car in a garage near Shrewsbury in 1968 which was evidenced in the minutes from the local Alvis Club meeting on the 6th August 1968: “Don's Speed 25 looked as immaculate as ever and a tip off from Don (Jones) of a Speed 25 lying in a garage at Shrewsbury has since led to me acquiring the car. It is a 1939 Charlesworth Saloon DVC 581 which was driven into the garage where it was found two years ago. The engine was removed and such jobs as a bottom end overhaul carried out before enthusiasm waned and the car was left to be surrounded by dozens of lorry tyres and other debris” – Mike Ridley.

Its original engine 15120 was subsequently offered for sale in the Alvis Owner’s Club magazine as late as June 1999 and was described then as the ‘ex-Monte Carlo’ engine. The advert read: “Speed 25 engine no.15120 from car SC 19947, believed Monte Carlo Rally car engine. Coppered cylinder head. Dismantled. Offers.” The engine’s current whereabouts is unknown although it presumably still exists and with a bit of detective work, might one day be reunited with its original chassis.

The bodywork is described as original and remarkably sound, although the car will require a careful restoration to both the mechanics and the coachwork before being used once more. It comes with a brand new stainless steel exhaust and a recent set of five new tyres, although only one of these is currently fitted to the car. How it faired in the 1939 Monte is unknown, although it doesn’t appear in the list of finishers, just 39 of the 121 starters successfully completing the event – presumably it was a particularly tough year!

It will be down to the new owner to decide whether to sympathetically restore it to ‘oily rag’ condition, or go the whole hog and completely strip and rebuild the car. Whatever route they take, they will end up with a very special pre-war saloon with an interesting past and plenty of performance on the road. Although there are no documents with the car, the registration number DVC 581 is still recognised on the DVLA computer and getting a new V5C should be straightforward with the relevant forms.

Brightwells have managed to unearth a number of these elegant late-1930s Alvises over the last year or so, although sadly we can’t guarantee to keep turning up these exciting finds so you had better bid enthusiastically on this one while you have the chance!