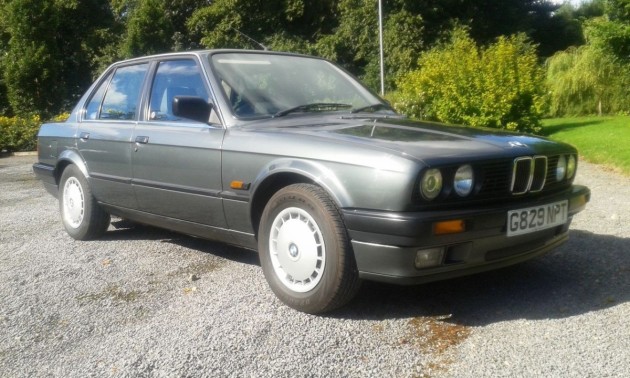 The superb E30 series of BMW compact saloons and coupes ran from 1982 until 1994 and, to many enthusiasts, were the last of the real driver-focused models from BMW.

Later 3-Series became increasingly heavy, and although regular injections of extra power made them faster, they lost much of the pep and brio of the simpler and lighter models. It is worth remembering that the first M3, widely regarded as the finest handling BMW ever made, was based on the E30 chassis and is now seriously expensive and collectable today.

One of the most popular models in the E30 line up was the 318i which initially had a 105bhp M10 four-cylinder engine but from 1987 had an improved 113bhp M40 engine which gave it a top speed of 115mph and a 0-60 time of 12 seconds for the automatic and 10.8 seconds for the manual version. Arguably better balanced than the larger-engined six-cylinder models, it was the car to have in the late Eighties when it became known as the ‘poor man's M3’ although even then they were never exactly cheap. Superb driving machines, they are still sought after today.

Dating from 1990, this 318i four-door automatic has covered only 38,000 miles from new in the hands of just two owners, being father and son at the same address. Finished in classic Dolphin Grey Metallic with silver grey trim, it had power steering and central locking as standard while extras included electric front windows, front fog lights, Blaupunkt Cambridge radio/cassette and, most unusual, a limited slip differential. The only later additions to this spec being the fitting of a subtle colour coded boot lip spoiler and an exhaust tailpipe trim.

It comes with complete boot lid tool kit, BMW torch in the glove box, four spare keys, handbooks and a service book with nine stamps from the supplying dealership, plus many BMW dealership receipts and MOT certificates. Other than the new battery, the two owners always used original BMW parts, even down to replacement wiper blades. The last time the car visited the dealers was for a rear brake overhaul at 34,700 miles. The original supplying dealer number plates are still on the car.

Having had very little use in recent years, the car has just been recommissioned with fresh oil and filter, air filter, spark plugs, front brake pads and front tyres. Having been cherished all of its life it still drives as BMW intended with an MOT until May 2017 with no advisories recorded. Low miles, low ownership, lots of history and superb condition, it all adds up to a rare find indeed.