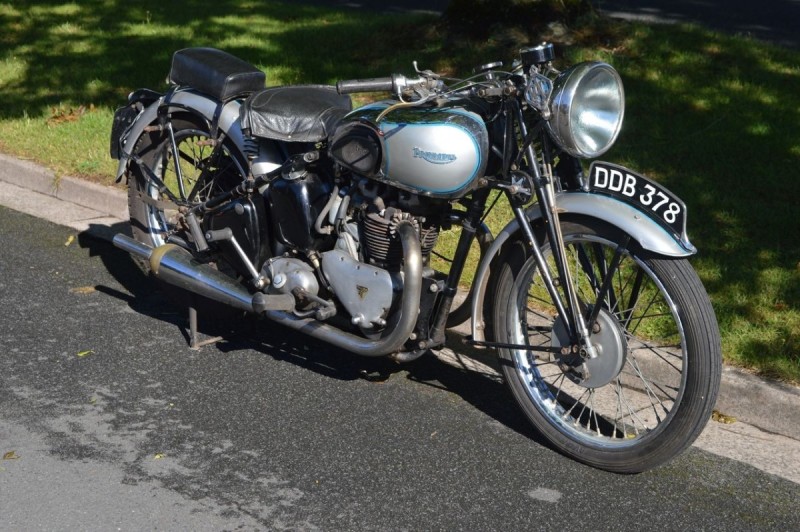 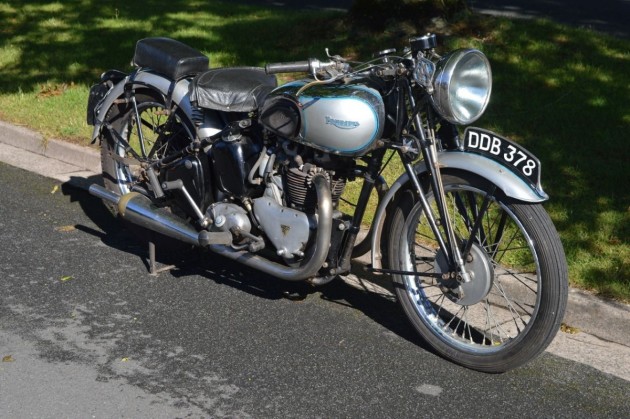 Edward Turner updated his 1937 machines with a more sporting range of machinery, unveiled to the public in the autumn of 1938.

The big news was the superb Tiger 100 (signifying its 100mph performance) which was the bike everyone was talking about. Sadly, Turner’s ideas of world domination were thwarted by an Austrian-born house painter who had world domination plans of his own, thereby keeping Messrs Triumph busy with producing military hardware to thwart him for the next six years.

This particular machine was certainly caught up in the conflict, a letter on file from the ‘Advice Service’ at Motor Cycle News confirming that its TF frame number prefix proved a build date of 1940 and that it would have been one of the last to be made in Triumph’s Coventry factory before it was bombed out in November of that year.

It was most likely pressed into War service, although what it did and where it served is not known. First UK registered in 1948, it would have been sold off post-war and registered for civilian use. On offer from a deceased estate, nothing has ever come to light about its life between 1948 and the early 1970s when it was rescued by its long-term owner from a gentleman living near Worcester. It was in a parlous state when it was discovered, sporting a set of girder forks from a Levis.

A full restoration took place, a set of correct forks being sourced from George Yeomans, the splendid machine being put back on the road in the mid-‘70s. Used extensively for national and international tours, it has been a much-loved member of the family ever since. They have been able to confirm that DDB 378 retains its original engine and comes with an accumulation of paperwork including its buff logbook, 16 old MOTs, a Haynes manual and lots of bills and notes. There are also two letters from Triumph, one confirming the frame details and another in answer to a technical query about brakes.

This nicely patinated, rare pre-war example has always been maintained and repaired as one would expect of a well-used machine. It was in full running order when its owner passed away earlier this year and, judging by the length of his ownership, it clearly fitted him like a glove. This pedigree bike would be a superb addition to any collection.

AMENDMENT; Bidders are advised that the front forks are from a slightly earlier T100 model.