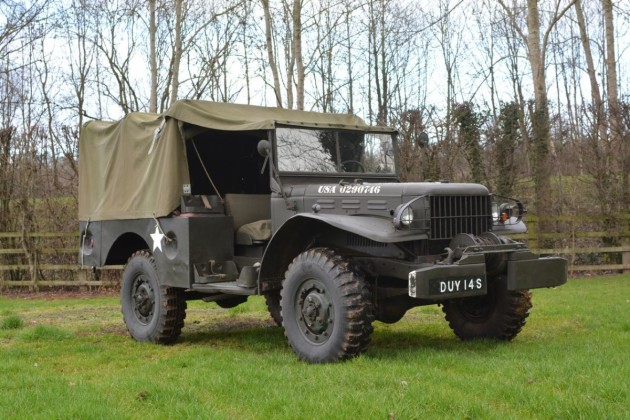 Often thought of as the Jeep's 'big brother', the four-wheel drive Dodge WC Series was one of the most successful and versatile military vehicles of the Second World War.

Launched in 1941 and remaining in production until 1945, over a quarter-of-a-million were made in a bewildering array of ½ and ¾ ton variants ranging from ambulances, mobile workshops and signals trucks to personnel carriers, gun platforms and command cars.

Around 60,000 of them came in the form of the WC52 weapons carrier, a ¾ ton cargo truck of outstanding versatility with an open cabin, canvas roof and rudimentary seating in the rear. With a 1,750lb payload capacity and weighing 5,945lb net, it also had a Braden MU2 winch at the front with a 7,500lb towing capacity which gave it the ability to get just about anywhere, no matter how harsh the terrain.

Power came from a Dodge 230ci (3.8-litre) straight-six side-valve engine producing 99bhp at 3,200rpm and bags of low down torque. Mated to a four-speed gearbox, with first being a 'crawler' ratio, and separate selection of four-wheel drive, it proved virtually indestructible and served with distinction in many different theatres from the heat and dust of the desert to the snow and mud of the North European winter, earning the same affection among the troops as the iconic Jeep.

Dating from 1942, this WC52 has had just two UK owners since it was first registered here in 1977, being with the current registered keeper since 1984. We are told that the vehicle was restored about 20 years ago, including an engine rebuild and conversion to alternator charging, and although there are no bills for this, there are various invoices documenting routine maintenance back to 2009. In October last year it was given a thorough check-over with all fluids topped up or renewed and the engine compressions checked and found correct.

Said to start, run and drive with good oil pressure, it comes with a quantity of spares, several jerry cans, a period axe, pick and shovel plus an original 1942 Dodge Trucks maintenance manual which should help to keep it running for many decades to come. Tax and MOT exempt, this rugged and thoroughly practical workhorse just oozes wartime cool and is sure to provide a lot of fun to its fortunate new owner both on and off road, or on the burgeoning military vehicle show circuit. It is being offered here at no reserve so the best bid takes it home.