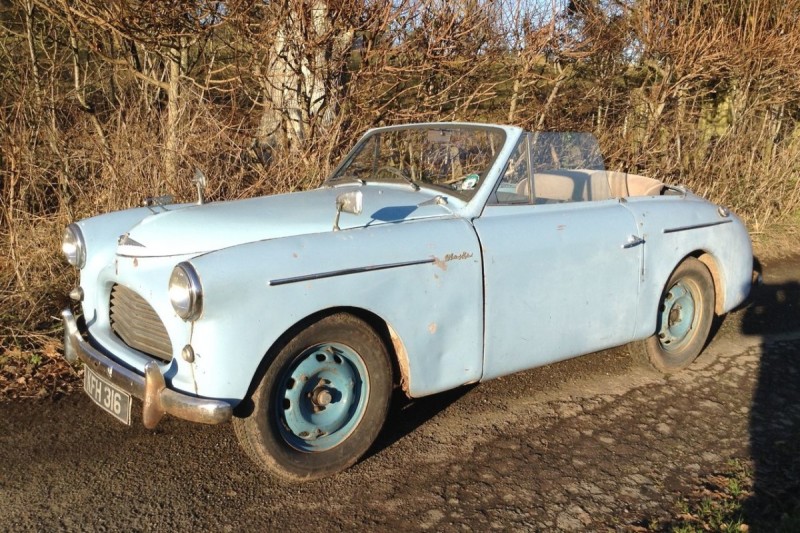 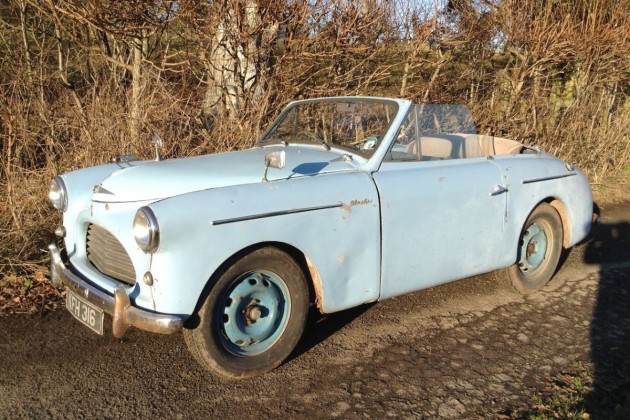 The A40 Sports came about when Austin’s chairman, Leonard Lord, saw the striking Jensen Interceptor and requested that its designer, Eric Neale, produce a smaller version based on A40 mechanicals.

Based on the running gear of the A40 Devon, the Sports had light aluminium coachwork on a stiffened A40 frame with a boxed centre section to provide rigidity for the open body. The rolling chassis were driven from Austin's Longbridge plant to Jensen in West Bromwich where the bodies were fitted before they were driven back to Longbridge for final assembly. This included the fitment of a twin carb version of the 1.2-litre engine which produced 46bhp, up about 5bhp from the standard A40 unit, giving the Sports a top speed of 78mph. Steering was by worm-and-roller, front suspension was independent coil springs with a rigid beam axle and semi-elliptic leaf springs at the rear.

The initial GD2 Series came out in November 1950 and had floor-change gears and a dashboard identical to that of the Devon, but for the GD3 Series of August 1951 column-change gears were adopted with a revised dash and fully hydraulic brakes. As a publicity stunt to promote sales, Leonard Lord challenged Alan Hess of Austin’s publicity department that he couldn’t drive around the world in 30 days so on 1st June 1951 a bog standard A40 Sports driven by Hess picked up the gauntlet and left London. 21 days and 10,000 land miles later (plus rather more by air), it was back in London without having ever missed a beat.

By the time production came to an end in April 1953, just over 4,000 Sports had been built, not bad when you consider that, at £818, it was £300 more than a standard A40 and £250 more than a typical six-cylinder family saloon such as the Vauxhall Velox. Survivors are rare and sought after today.

First registered in Gloucester in 1952, this Ming Blue GD3 Sports has never strayed far from that locality, the vendor acquiring it from a gentleman in Cheltenham back in 1987. In highly original and unmolested condition when acquired, the vendor has purposely striven to keep it that way throughout his 30-year ownership, eschewing the ‘boiled sweet’ restoration look in favour of a sympathetic programme of ongoing maintenance and minimal repair to keep it in sound and drivable condition without losing that irreplaceable patina that only comes from decades of use.

This has included new sills and localised repairs to the structure as required, along with a full engine rebuild comprising new crankshaft and bearings, +60 thou rebore, head overhaul with new valves etc, the machining been done by Hereford Rebore. A new water pump has also been fitted along with a new clutch kit, rebuilt carburettors, new king pins, reconditioned radiator, bespoke stainless steel exhaust, full brake overhaul, waxoil treatment etc. A new wiring loom has also been fitted including a feed to the semaphore indicators in case they are to be brought to life again, double-filament bulbs to the side and tail lights acting as indicators in the meantime. There is a spare feed for an extra horn too, if desired.

Since the engine was rebuilt in the early 1990s the car has covered just under 3,000 miles and the 95,650 miles currently on the clock is believed genuine. This included a memorable club outing from Leominster to Longbridge to Gaydon to Bicester and back a few years ago during which the car cruised happily at 50mph+ and never missed a beat. Only lightly used since, the car certainly went well when we were treated to a short test drive on the occasion of our visit with a notably sweet-sounding engine and very effective brakes.

The blue soft top is in serviceable condition although there is a slight tear in the rear window. Supplied with sundry invoices and 10 old MOTs from 1998 to 2013, it also comes with an original owner’s handbook and factory workshop manual.

Familiar to the Austin Counties Car Club, a thriving and friendly group of which the vendor is a long-standing member, KFH 316 always draws lots of attention wherever it goes thanks to its delightful ‘oily rag’ condition. Only reluctantly for sale to help fund a barn conversion project, it now just needs a sympathetic new owner to use and improve it as they see fit.