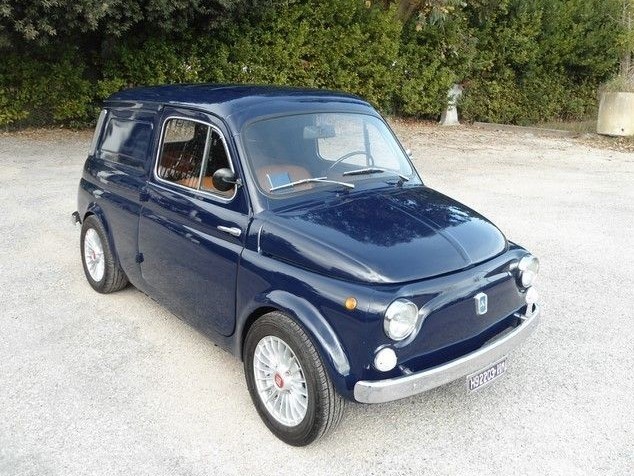 A masterpiece of minimalist motoring, the Dante Giacosa-designed 'Nuova' 500 was launched in 1957 to replace the famous and much-loved 500 'Topolino'.

Making our own Mini look positively bloated, the 500’s tiny curvaceous body nevertheless had room for two adults and two bambini and gave the 500 huge character. Powered by a miniscule twin-cylinder 499cc air cooled engine with a four speed crash gearbox, the car was an instant success both at home and abroad.

The 500 was produced not only in saloon form, but in open-top, estate, and in van form. The van, or Furgoncino, had the extended floor-pan and horizontal version of the lively twin-cylinder engine also used in the estate (Giardiniera). The single rear door gives access to a surprisingly capacious load area.

This 1972 Furgoncino was first owned by the Bank of Italy (and yes, we have checked for lost lire under the seat). It is surprisingly original, although it is not known when the sports exhaust and alloy wheels were fitted. It is said to be quicker than a standard 500 and is believed to have had some Abarth tuning modifications fitted.

Produced in Monza and sold in Italy as an Autobianchi, this Furgoncino is UK-registered and has an MOT which runs until January 2018. It is in lovely condition and has had around £1,500 spent recently to put the steering and suspension in order. It is road tax exempt.

This little van would make an ideal advertising vehicle for any small business owner. There is enough power to keep up with modern traffic, fuel consumption is around 50mpg and there should be no problem parking it, even in the tightest of spaces.

The Giacosa 500 is one of the great twentieth century’s people cars and the Furgoncino is a quirky yet functional variant that is fun, practical and will draw attention wherever it goes. It’s a cutie!

The Furgoncino comes with a V5C, MOT, a dating letter from Fiat Chrysler Automobiles, a Certificato di Proprieta from the Automobile Club D’Italia and the original registration document. It is tax exempt.