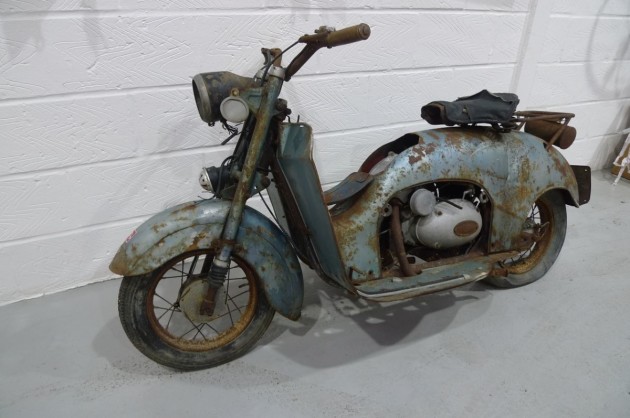 Renzo Rivolta built up a successful refrigeration company in Genoa, Italy during the 1930s and moved into moped production shortly after the Second World War.

The company produced two-wheelers for around 12 years before moving on to three- and four-wheeled ‘bubble cars’ (Isetta) and then getting serious with the Iso sports car such as the Rivolta, Grifo and Lele.

Two of Rivolta’s early efforts are offered here. The Iso script on the legshields is the name Rivolta gave to his motorized products and the Isothermos badge on top of the forks is most likely taken from one of his refrigerators. Both scooters are in need of restoration and will be an unusual and interesting addition to any collection.

The bodywork on both scooters is admittedly rusty and a little damaged in places, but the styling is unusual – which is a great part of the attraction. You cannot deny they have a certain ‘non lo so’ (Italian for ‘je ne sais quoi’).

The engines of these bikes are also interesting being based on the Puch ‘split single’ two-stroke system which uses two parallel pistons, two cranks and one cylinder head! This type of engine was used on a number of Iso bikes and early cars. The quality of the engineering was highly regarded in its day. The capacity is unknown, but believed to be 125cc and both bikes are believed to date from 1960, the year when Iso ended two-wheeled production.

There are no documents with these bikes, but the Old Italian Bike Register are a helpful and friendly bunch and will no doubt assist in getting them registered.