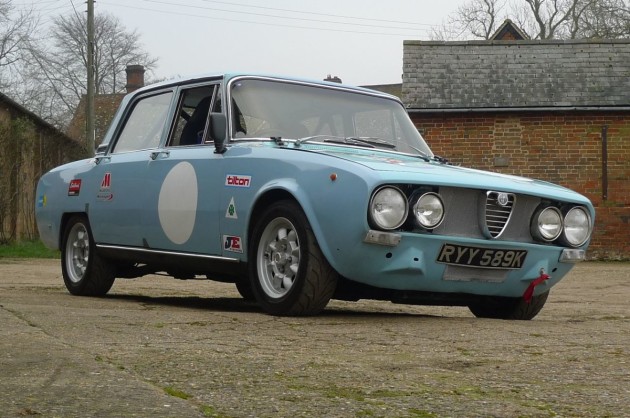 Launched in 1967, the Berlina 1750 was an upgraded version of Alfa’s Giulia saloon, featuring a stronger bodyshell that was slightly longer in the wheelbase with a roomier cabin and a smoother, quieter version of the now legendary 1,750cc twin cam engine.

Sharing the same suspension, steering and all-round disc brakes as the Giulia saloons and coupes, it was wonderfully engaging to drive, overflowing with a Latin brio that made contemporary British sportscars seem leaden by comparison.

OK, the styling may not have been Marcello Gandini’s best (he also penned the Lamborghini Miura and Bugatti EB110), but in a perverse way it actually enhanced the car’s appeal as no one expected something quite so brick-like to go and handle so well! With 132bhp on tap driving through Alfa’s excellent 5-speed gearbox, it could top 110mph. Despite low sales in the UK, Alfa managed to produce over 100,000 of the Berlina before production ended in 1972.

Even those unfamiliar with Alfas will see that this one is a bit special. Sold new into South Africa in 1971, the car came over to the UK and was registered in 2004. It is believed that the car was converted to competition/track day specification shortly after its arrival.

Although the car has an MOT (to January 2018) it is really a no-holds-barred racer/track day car, although there is plenty of room in the back for the shopping which would make those trips to Tesco so much more enjoyable.

The suspension has been lowered and genuine 14x6 Minilites fitted all round. The 1,750cc engine has been replaced with an improved 2,000cc version (high compression pistons, lumpy cams, etc) and the car has twin servos fitted which should help when hauling in all the extra horses.

The exact history of the car is not known although there is a letter on file from Giles Amos of Classic Alfa confirming that he installed the two-litre lump in 2008. The car also passed through the hands of historic Alfa guru and all round good guy Peter Smart, who recalls the car as being very quick and quite handy on track. In fact, the car is quite well known to many Alfa enthusiasts who will have seen it humbling some much more expensive cars at various track days over the last 10 years.

The bodywork is very sound although the two-tone paint job is a little haphazard (it is no show queen) and may not be to everyone’s taste. On the positive side it does provide a reason to re-paint the car…..Alfa red?

Inside the car is fairly spartan: two racing bucket seats, full harnesses, and full roll cage. There is no in-car entertainment apart from the speedo and the rev-counter, although for most people the sound of the un-filtered Dell’Ortos under the bonnet will be music enough.

This Alfa is an opportunity to obtain an established, well-developed competition car at substantially less than the cost of the parts and preparation.