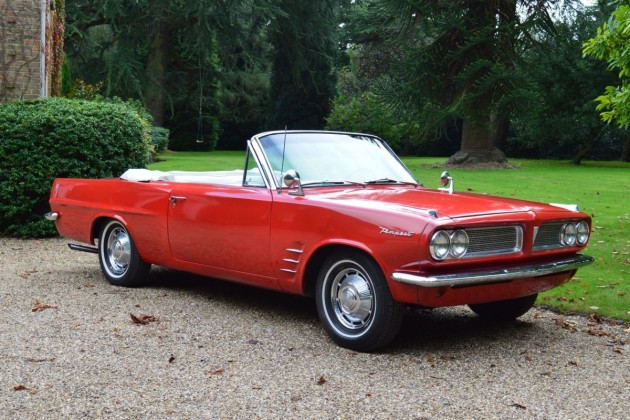 One of the most innovative American cars of the Sixties, the 1961 Pontiac Tempest was designed by a team led by John DeLorean, a high-flying engineer recently poached from Packard by General Motors and soon to become famous as the ‘father of the muscle car’ with the legendary Pontiac GTO of 1964.

What set the Tempest apart was a unique drivetrain featuring a rear transaxle connected to the engine at the front via a patented flexible driveshaft known as ‘rope drive’. Not only did this give the car near perfect 50/50 weight distribution, it also eliminated vibration, enabled four-wheel independent suspension and did away with the conventional transmission hump in the floor. The engine was also unusual for a Yank, being a 195ci (3.2-litre) straight-four (marketed as the ‘Trophy 4’) which was effectively the right bank of Pontiac’s 389ci V8 and produced between 110 and 155bhp depending on the state of tune, with 18-22mpg economy.

The monocoque body had sharp Sixties lines which still look fabulous today, the car being nicely compact and not too big for British roads. Available as a four-door station wagon or sedan and as a two-door coupe or convertible, the Tempest remained in production until 1970, with a major restyle in 1964 and again in 1968, although only the first cars had the transaxle and the compact dimensions.

Rarely seen in the UK, this first series 1963 Tempest Convertible was bought by the vendor while working in California three years ago from a gentleman who had owned it for over 20 years. He used the car for exploring the sights of the Sunshine State, enjoying it so much that he brought it back to the UK when he returned here in June 2016. In July 2017 the car was invited to the Concours d'Élégance at the Hurlingham Club in London, this being a model that the judges had never seen before.

In highly original condition throughout, the bodywork is said to be very straight with good panel gaps although the paintwork is now showing signs of age. The chassis is said to be in great shape, with no visible rust or signs of previous damage. The interior is also original and still retains the original Pontiac stereo system (although this needs connecting). Unlike some convertibles, the Tempest also comfortably carries front and rear seat passengers with the hood both up or down.

Well-maintained by the previous long-term owner, the engine and transmission are said to be in good order. The electrics were rewired to incorporate a modern fuse system with everything working as it should apart from the fuel gauge. A new correct canvas soft top has recently been fitted along with a new battery; new tyres; various new hoses; new felt weather stripping on all door windows and new rear brake cylinders (spare shoes are included in the sale). A new windscreen and seal was also fitted in California after someone took a pot shot at the car, the bullet ricocheting off the front fender (which still bears the finger nail-sized scar) and smashing the screen – only in America!

PLEASE NOTE: This car is now being sold with no reserve and the vendor would like potential bidders know that it was driven 150 miles to the sale.