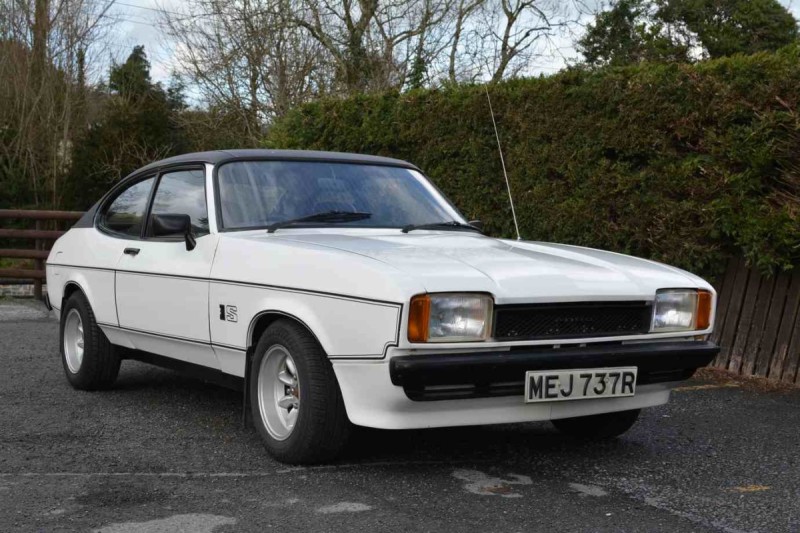 Launched at the 1969 Brussels Motor Show, the Capri instantly became the most desirable model in Ford’s European range and was every thrusting young executive’s dream set of wheels.

With its aggressively long bonnet and swooping rear it looked like it was doing 100mph even when standing still. Conceived as a European alternative to the all-conquering Mustang, it was available in a wide range of engine sizes from a basic 1.3 litre four to a tarmac ripping 3 litre V6.

Mechanically straightforward, a traditional live axle with leaf springs was deemed sufficient at the rear, while Ford's excellent Macpherson struts at the front and well weighted rack-and-pinion steering gave it a sufficiently sporting feel to justify its sports car looks.

This is the one to have – the 3-litre V6. Sold new in 1977 by JP Jones, Ford dealer in Felinfach, West Wales to a local PT instructor who used it for travelling up and down to college in Cardiff. He kept the car for two years when it passed into the hands of the local vicar who used the sporty steed to visit his parishioners (isn't it supposed to be the meek who inherit the earth?). It stayed with the reverend gentleman for around four years before he passed it on to a man who knew exactly what he was buying, and not just because he was the vicar’s son.

The new owner worked at the local Ford main dealer, Lloyd Motors, so he knew what he was getting into. He must have been happy with the car too, for it is only now that he is selling her. He used the car regularly before taking it off the road over the winter of 1995-96 to fit two new front wings and carry out a full respray. He also replaced the Ford alloy wheels with the current Minilite replicas shod with Avons.

The car has been cared for throughout its life by its mechanic owner but no records were kept of the work done. The state of the car speaks for itself, although the vendor has removed some of the waxoil in the engine bay to confirm the soundness of the bodywork. The recorded mileage at the time of its overhaul in 1995 was 70,117, after which the car was used sparingly (the clock currently shows 72,568 miles) and was kept in a heated garage.

This is a genuine low mileage example of ‘the car you always promised yourself’ with factory extras including sunroof, radio, luggage restraint tonneau and Ford mudflaps. It also has a spare set of keys still with the supplying dealer's fob attached, plus 18 old MOTs.

There is room for improvement but it is not a restoration job by any means. Rather it is a car that can be enjoyed and improved at the same time, and one that is both useable and collectable. It is hoped that a new MOT will be gained in time for the sale.