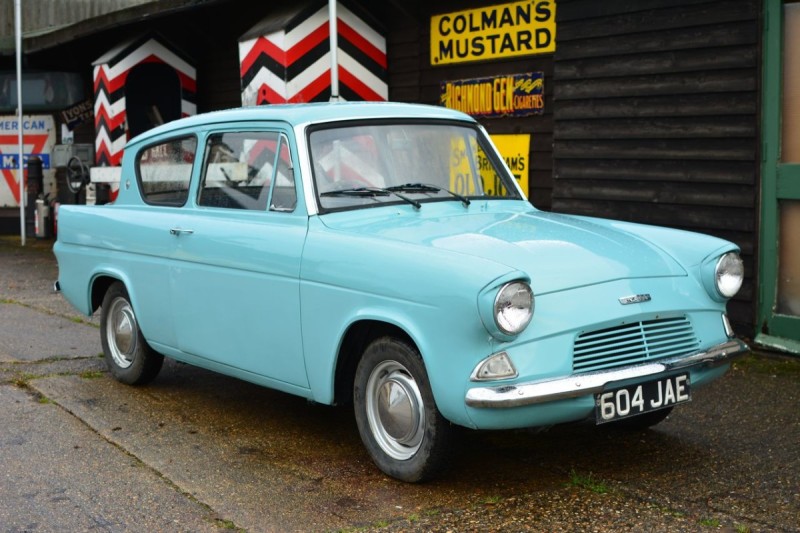 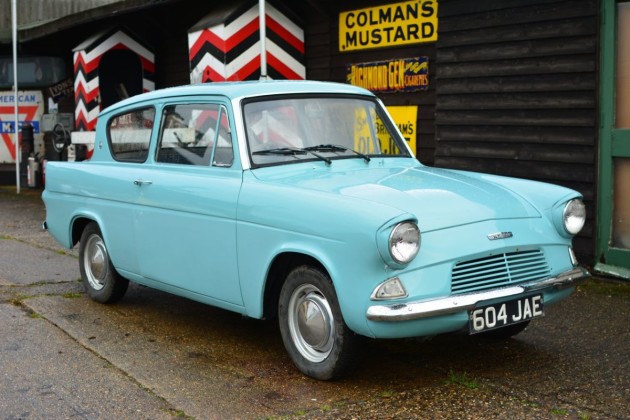 Launched at the same time as the Mini and the Triumph Herald, Ford’s new small car offering for 1959 was the Anglia 105E.

Although it was hardly in the same mould-breaking category as the Mini, the Anglia was bang up to date in terms of styling, its most recognisable feature being the ‘reverse slope’ rear window which, together with the car’s pointed tail fins, made it quite striking.

Ford had finally seen sense and had ditched the pre-war designed side-valve engine and replaced it with a new overhead valve 997cc unit mated to a new 4-speed gearbox. Astonishingly, this engine would stay in production in modified form for many years to come and can still be found (in fuel injected form) in recent models from Ford’s small car line-up from the 90’s including the Ka and the Fiesta!

Production continued until the arrival of the MkI Escort in 1967 with over one million Anglias sold, the plucky car enjoying a resurgence in popularity of late thanks to appearances in the Harry Potter films.

First registered in May 1960, this Anglia is believed to have had only three owners prior to the current one, a film services company who inform us that this Anglia has featured in various productions including ‘Endeavour’ and most recently, 2016’s hit horror film ‘The Conjuring II’ (which your cataloguer can confirm is indeed somewhat frightening!).

This charming example comes with a huge history file, complete with its rather splendid original Ford purchase order and warranty card. Specified in May 1960 with Pompadour Blue bodywork and PVC trim, the price paid was what can only be described now as exceedingly good value at £623 and some loose change.

The chronologically ordered history file contains no fewer than 34 old MOTs dating back to 1971 when the car was showing 31,772 miles, along with a selection of old tax discs from 1975 onwards and a staggering amount (150+) of historic service and maintenance records from 1960 onwards. Documentation in the file suggests this little gem was restored in the early 1990s and has clearly been looked after since then.

Displaying an indicated 68,900 miles on the clock, it has a nicely preserved blue interior which lends credence to the mileage being genuine. The bodywork appears to be in sound and largely original condition although there are signs of restorative paintwork with areas of white paint evident in the door jams.

Easy to maintain and cheap to run, this characterful classic no doubt has years of useful life ahead of it and an unusual claim to fame; not quite Harry Potter but a big screen star none the less.

AMENDMENT: This car now has an MOT valid until February 2018.