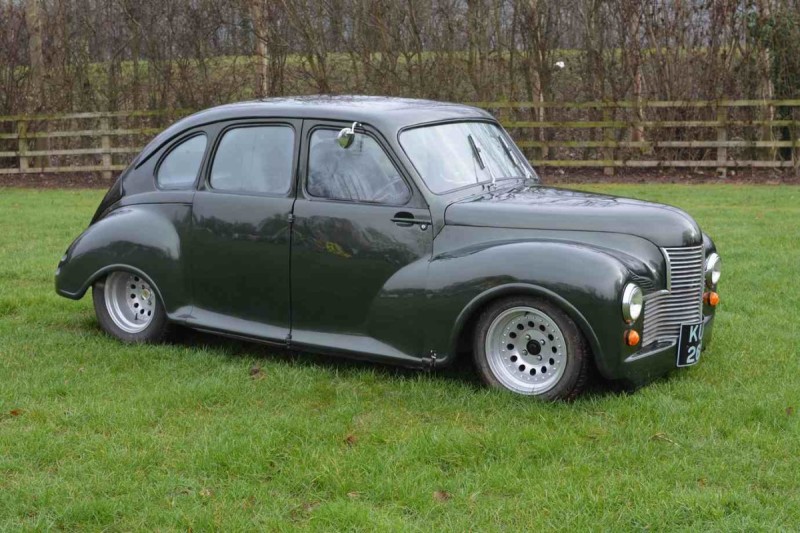 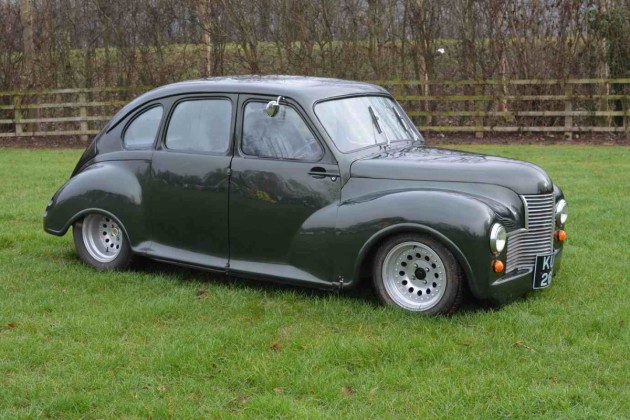 The Jowett brothers began making cars at their Bradford factory as early as 1906 and quickly earned a reputation for making tough, well-engineered cars with outstanding economy and excellent pulling power; ideal for charging around the Yorkshire Dales!

The car that really put them on the map was the Javelin, a compact family saloon that was so far ahead of its UK-produced rivals that it had more in common with the best that Europe had to offer. Designed by Gerald Palmer and launched in 1947, it was intended to be a major leap forward following the relatively staid pre-war designs.

Fast and economical, it achieved considerable competition success due in no small part to its good aerodynamic shape, light weight, rigid construction and torsion bar suspension. Production ended in 1953 after over 25,000 had been sold.

This car is not your standard Javelin. Gone is the flat four 1500 with its modest 50bhp and in its place is a 5.3 litre Chrysler V8 - how did they do that? Well, by making up a new 4” box section chassis, re-modelling the under-bonnet area and fitting a flip front.

Then of course you will need a suitable gearbox (Torqueflite 727 Auto plus B & M shifter) and a stronger back axle (hotrod industry standard Volvo), adjustable coil springs, discs all round and custom exhausts. Wheels? Custom alloy Racelines. Paintwork? Moss Green Metallic.

Yes, what we have here is a hotrod, but it is that rarest of things: a restrained hotrod. No purple metal flake and no flames on the bonnet. In fact, if you were to park it outside The Idle Working Mens’ Club it would probably not attract too much attention. (Idle: home of the Jowett Car Company – geddit?)

The interior is also restrained (giant rev-counter apart) in black vinyl (or imitation Naugahyde), with a sensible array of black-faced classic instruments on the dash and a third seat squeezed in the back – originally for the constructor’s grandson (brave boy).

It has been called a 'Gentleman’s Hotrod' if that doesn’t sound like a contradiction in terms. What it is, is a well-constructed and imaginative custom car which could be at home on the street or the strip – which is what a hotrod was originally before it all got a bit silly.

This is quite a well-known car and one that has been around long enough to have been thoroughly de-snagged. You could use it on the road, once you have got used to its little idiosyncracies (it’s not a Nissan Micra, after all) and you could drag it, if you have the nerve. The prefect all-rounder then?

It’s a lot of bang for your buck and very reasonable estimated here. It’s also tried and tested and something that you could not build for twice the price. It’s a bargain – all you have to do is convince the wife.

She is road registered with a current V5C and also happens to be tax and MOT exempt.