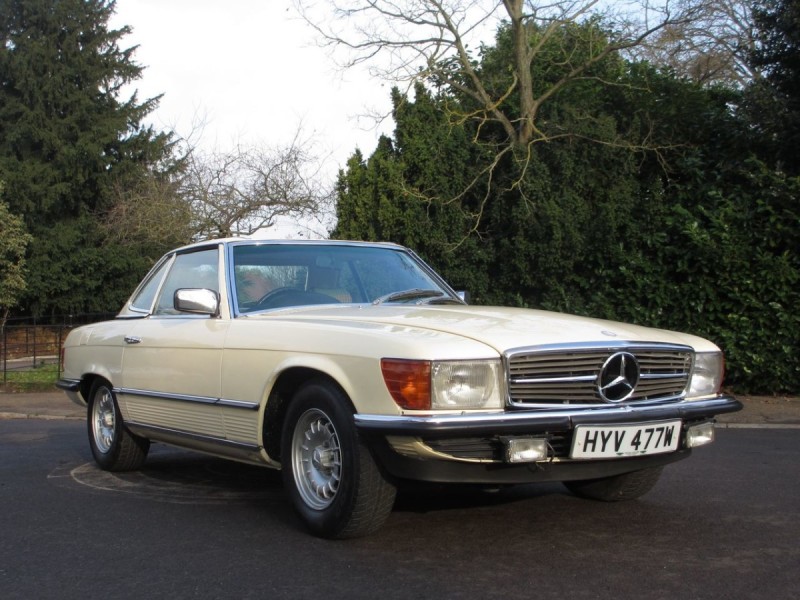 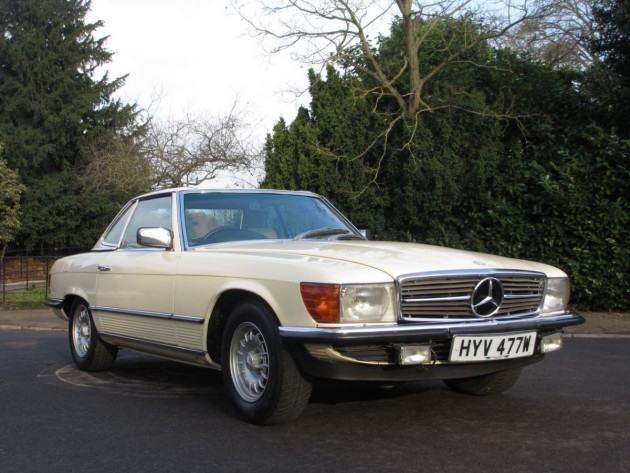 Launched way back in 1971 to replace the altogether more delicate W113 ‘Pagoda’ series, the W107 SL was a massively well-engineered roadster that was to remain in production fundamentally unaltered until 1989 – the longest running chassis in Mercedes history.

Built at a time when the Stuttgart firm still had a reputation for building cars which made nuclear shelters feel a bit flimsy, it was nicknamed the ‘Panzerwagen’ by the development team. A much heavier and more luxurious machine than its predecessor, it required a far bigger lump to propel it.

Half-a-dozen engines were offered in all, but cream of the crop was the mighty 5-litre V8 you see here. Producing 242bhp and 297lb/ft of torque, it could waft the car to 60mph in just 7.2 seconds on its way to a top speed of 140mph, yet had a reputation for unburstable reliability, clocking up vast mileages with ease.

This cream 500SL was supplied new in February 1981 by Alan Day Ltd of Hampstead to Mr Wallace King of Hendon with the optional rear occasional seats in place of the standard luggage deck. The car has its original maintenance booklet, owner’s manual and pre-delivery inspection sheet. A number of MOTs from the life of the vehicle are available as well as servicing and maintenance records, the odometer currently reading some 80,150 miles.

The vendor states that: “The car has undergone recent restoration. The boot lid, boot springs and soft top horseshoe have been replaced. The off-side rear inner and outer wings have been replaced. The-off side boot floor has been replaced as has the petrol tank bulkhead. The off-side front footwell as been repaired with a replacement kick plate. The car displays some rust bubbles on the front off-side wing and rear off-side bumper. The speedo has been subject to refurbishment. The car was recently serviced including replacement spark plugs and new shock absorbers The engine runs very well and provides the power one would expect from a V8. The interior is original and in good condition.”

Supplied with an MOT valid until September 2017 with no advisories recorded, it also comes with a good soft top and a satisfactory hard top. With the best 500SL Roadsters now changing hands for more than double the estimate suggested here, this one certainly sounds worth a look.