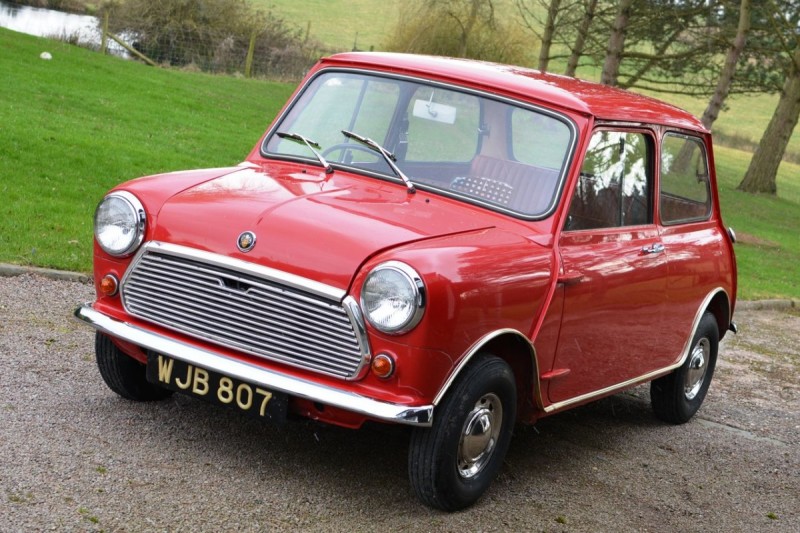 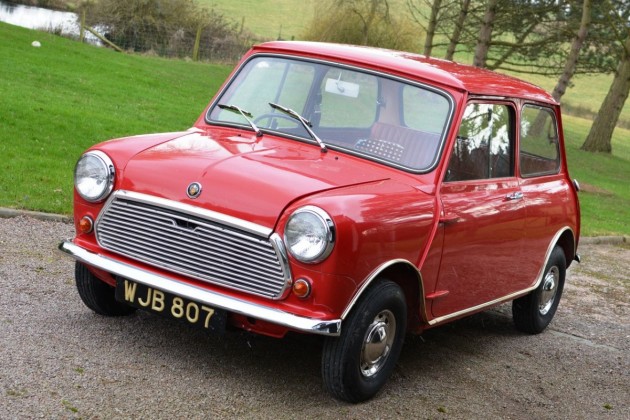 However, as word gradually leaked out about its amazing handling prowess and huge fun factor, it quickly became a cult object that came to symbolise the freedom of the Swinging Sixties. One of the undisputed greatest car designs of all time, it had a classless appeal that made it welcome everywhere and by 1966 over a million had been sold.

With go-kart handling and excellent brakes, it was a huge success in competition and literally ran rings around far larger and more expensive cars that simply could not keep up with its cheeky pace. It was to remain in production for an astonishing 41 years, still remaining recognizably the same car in 2000 as it had been at launch in 1959.

The original Mini MkI could be purchased from either your Austin dealer as the Austin Seven or from your local Morris agent as the Mini-Minor. Very small differences in specification differentiated the two cars, some produced at Longbridge, others leaving the Cowley plant in Oxford.

This particular Tartan Red Mini MkI has a fascinating tale to tell, being bought new by a BMC Director, George Jones of Solihull, in October 1960. Clearly a meticulous fellow, Jones kept a detailed log of every mile he covered in the car and every drop of petrol he put into it from new until 1981 when he gave up driving. His notebook reveals that in November 1969, when the car had covered some 55,600 miles, it went back to the Longbridge factory to be “rebuilt as new” but keeping its original registration number and MkI chassis number.

As the Mini MkII had made its debut in 1967, the car was rebuilt with the new body style including larger rear window, MkII front grille, larger square tail lights and a MkII badge affixed to the boot. The MkI swinging rear number plate holder, exterior door hinges and sliding windows were all features that continued on the MkII models. The seats and the BMC-branded inertia-reel seat belts are also to MkII spec but the ‘magic wand’ gear stick is the original MkI item which also continued on the MkII 850 models, and the minimlist speedo pod is the original early MkI type rather than the later 3-gauge item.

Once the car was rebuilt and the speedo re-set to zero, Jones continued to use the Mini, recording every journey up to 11th July 1981 when the car was finally put into storage with 5,046 miles on the clock. Here it was to remain for the next 15 years at which point the vendor, who was the founder and owner of Miniman, received a phone call from Mr Jones asking him if he would like to buy the car.

Initially he wasn’t particularly interested but as the Mini was not far away he decided to go and take a look anyway. When he saw the remarkable, rust-free condition of the car and heard the story behind it, he immediately became much more interested and a deal was quickly struck. During his 21-year ownership the vendor has barely used the car, mainly keeping it in storage although he did briefly MOT it in 2002 and in 2007 in order to take it to some shows. The speedo still only shows 5,140 miles which is the total distance covered since the rebuild in 1981.

In very good condition throughout, this fascinating early Mini with its factory-built mix of MkI and MkII features, remains in excellent running order and comes with an old style V5 which still records just one owner, the aforementioned mileage log, three old MOTs from 1981, 2002 and 2007, plus the original Austin Seven driver’s handbook and Schedule of Repair Charges.

Sure to prove a real talking point at any Mini event, it would sit well in any collection.

AMENDMENT: This car has only done 5,140 miles since restoration, not 51,400 as previously stated.