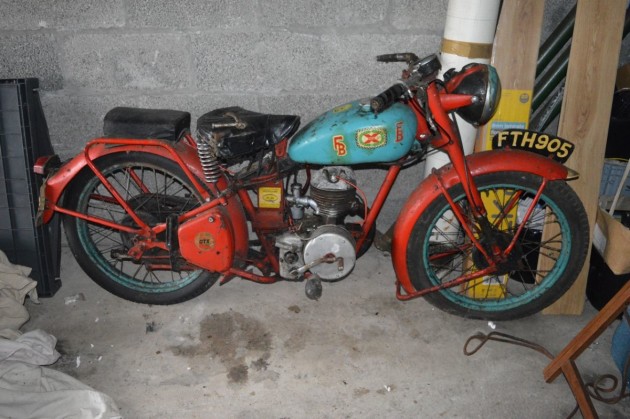 In the 1920s, the Coventry-based firm of Francis and Barnett produced JAP-engined four-stroke and Villiers-engined two-stroke motorcycles.

By the late 1930s, two-stroke power was becoming increasingly popular and around one-in-three bikes made use of it. After the war, Francis Barnett concentrated entirely on their two-stroke range, joining the AMC combine in 1947, their production focusing on commuter models with the occasional foray into more sporting off-road machines. Production ceased in 1966.

This Falcon 55 (not horsepower or even top speed, but a designation for those bikes fitted with battery-aided electrics!) dates from between 1951 and 1954. The engine is the once-ubiquitous Villiers two-stroke single, in this case a 197cc version.

The wheels and tank might give some clue to its original paint scheme, which could have been one of the ‘special order’ Azure blue models. The rest of the cycle parts have been attended to with some enthusiasm and go-faster red paint, turning this Falcon into something of a ‘Dulux’ model and effectively obscuring the frame number which would reveal all.

It is believed that the engine was last run in 1971 and the whole bike will need overhauling. It will be the prerogative of the new owner to decide whether to revert to original or follow where their imagination leads.

There is no paperwork with this lot and the registration number is not recognised by the DVLA. The ever helpful Francis Barnett Owners Club may be able to help in re-claiming the number or re-registering the bike.