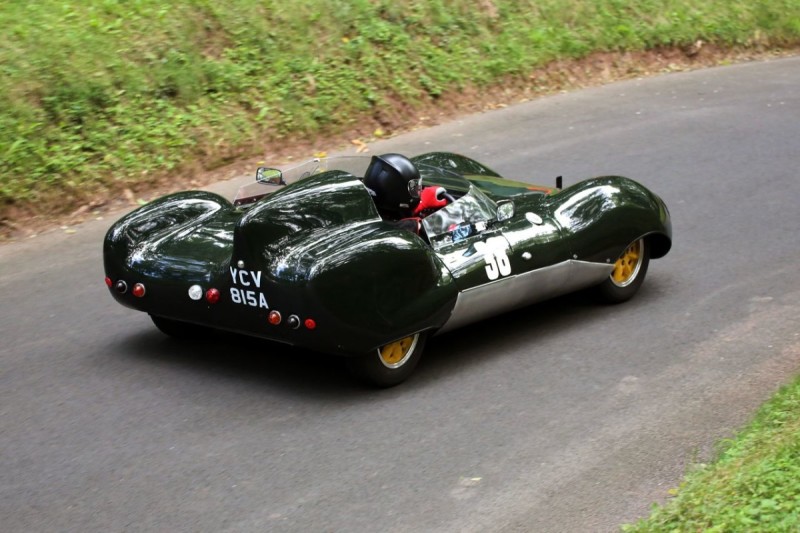 Responding to the popularity of the original 1950s Lotus XI which raced at Le Mans, Westfield launched a replica in 1982 with GRP bodywork based on an MG Midget / Austin-Healey Sprite donor vehicle.

Available either factory-finished or in kit form, the factory-finished cars were usually fitted with a tuned 1,275cc BMC A-Series engine although self-builders could opt for Ford Kent power or a Lotus Twin-Cam or Coventry Climax unit. The rear axle, gearbox, drive-shafts, front uprights, brake assembly, radiator, steering rack, wiring, and gauges all came from the Midget/Sprite donor.

Still in production today, the Westfield XI offers a real 1950s sportscar feel in performance, handling and looks. “You could drive the XI all day and never stop enjoying it”, said Evo magazine in a recent Track Day Car of the Year test.

This magnificent example was built by the vendor between 2011 and 2014 to keep himself busy in his retirement. Formerly a senior development engineer with MG Rover (and intimately involved with the wonderful carbon fibre-bodied Sport and Racing MG SV V8 Coupe of 2004), he has spared no effort in getting this car up to the desired standard and the results speak for themselves.

Power comes from a BMC A-Series engine bored out to 1,380cc and professionally rebuilt by Don Loughlin Engineering of Kidderminster (he being the Don half of Aldon Automotive fame), including new Powermax pistons (balanced and lightened along with the crank and flywheel), 246 Kent cam (nice and torquey for fast road use), mildly gas-flowed head and unleaded valve seats with standard valves. Electronic ignition and an uprated Facet fuel pump keep the sparks and juice pumping at the required rate. A super-lightweight Powerlite battery is also fitted along with alternator charging.

Rolling road tuned by Aldon Automotive in March 2014, the car has dyno sheets showing 70bhp with the twin SU carbs currently fitted and 80bhp with the Weber 45 DCOE and manifold set-up that is also available by separate negotiation if desired. Bearing in mind that the car weighs only 520kg, the power-to-weight ratio is tremendous and unless you normally drive a Bugatti Veyron you won’t find it lacking in the go department!

Transmission is by the excellent Ford Type-9 Sierra five-speed manual gearbox with competition half-shafts by Peter May Engineering of Ombersley. Suspension has been professionally set up and corner-weighted and features fully adjustable coil-over dampers which can be raised for road use and lowered for maximum attack track use. Braking is by discs up front and light alloy drums at the rear.

The BRG bodywork is superb and the vendor took great pains to smooth out the usual Westfield GRP moulding joints before the paint was applied so there are no unsightly bumps or ridges to compromise the finish. The interior is also in excellent shape as is the matching red tonneau cover.

Since the car was completed and SVA-approved in 2014, it has covered only 3,000 miles including a few sprints and hillclimbs at Curborough and Shelsley (pictured above) and a two-up tour of Northumberland with fellow MAC members last year, the vendor’s wife finding no cause for complaint with the ample luggage space provided.

Only reluctantly for sale due to the imminent arrival of another project, this beautifully made sportscar is being offered here at significantly less than it would cost to get one built professionally. Guaranteed to put an ear-to-ear grin on the face of its fortunate second owner, it comes with a very large file charting the build process and is due to have a new (first) MOT in time for the sale.

PS: This Westfield also comes with a workshop manual signed by Stirling Moss after he had admired this very car at Prescott.