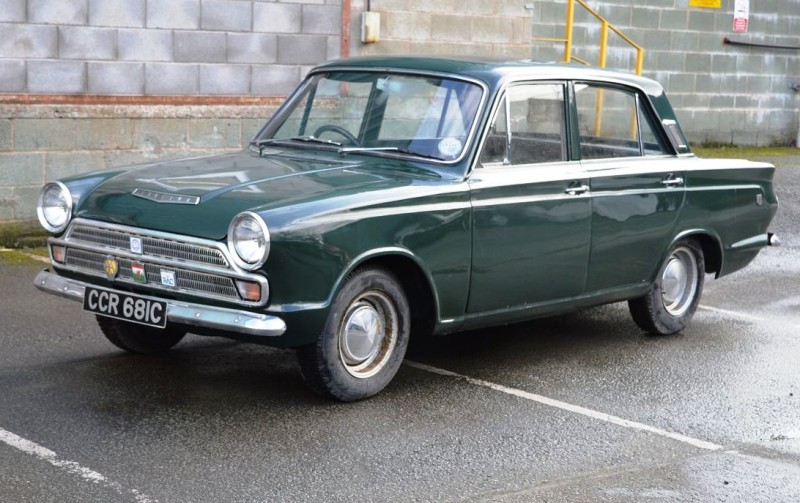 As the 1960s dawned, BMC were revelling in the success of their new Mini – the first successful true mini-car to be built in Britain in the post-war era.

Management at Ford in Dagenham decided they couldn’t develop a small car to the same scale as the production costs would be too high, so instead set about creating a bigger family car that they could sell in large numbers for a higher price.

The result was the Cortina, a distinctively-styled car aimed at buyers of the Morris Oxford and Vauxhall Victor, which they launched in September 1962. A massive success from the outset, the car confirmed Ford's reputation for offering a lot of car for the money.

Available with either a 1.2 or a 1.5-litre engine in two-door and four-door saloon and estate forms, it came in Standard, Deluxe, Super and GT trim levels. The GT appeared in Spring 1963 with lowered suspension and the engine tuned to 78bhp as opposed to the 60bhp claimed for the 1500 Super. It also got the GT treatment inside, with a dash studded with dials letting its thrusting young driver know what was happening under the bonnet.

Some 933,000 MkI Cortinas of all types were sold before it was replaced by the MkII in 1966, although the GTs were made in relatively low numbers and are highly prized today.

This 1965 four-door 1500GT was taken off the road in 2001 when a comprehensive restoration programme commenced. A huge amount of work was done, including stripping the bodyshell which was restored and repainted top and bottom in green livery.

The vendor acquired it as a stalled project with most of the work completed. He understands that the engine was rebuilt before installation and has now completed the job, offering the car with a fresh MOT and a few miles under its belt.

At the tender age of 52 years young, this rare Cortina 1500GT is remarkably sound bodily and has many more years of motoring ahead of it.

AMENDMENT; Bidders are advised that due to personal injury, the vendor has not managed to get the car running or consequently MOTd. This lot will now be sold without an MOT and with the engine not running, the vendor adding that he hasn't been able to start it due to a starter motor issue.