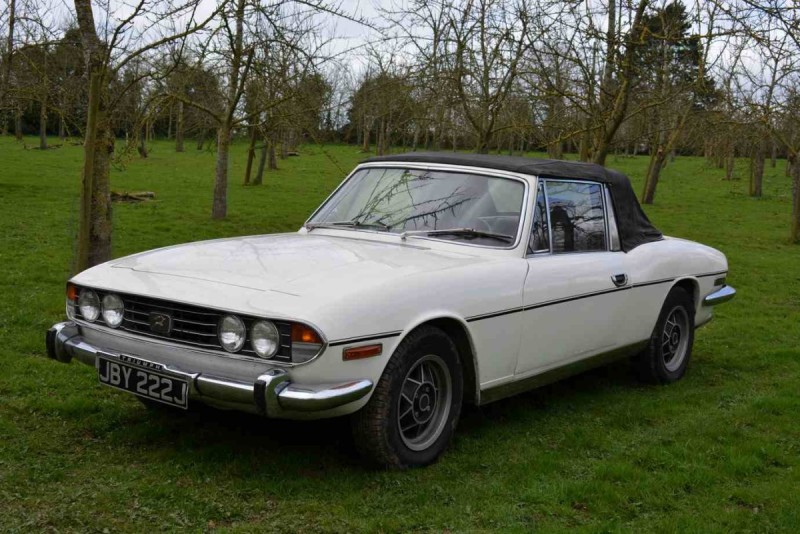 The Triumph Stag came into being because of the close relationship between Harry Webster, Triumph’s Director of Engineering, and Giovanni Michelotti who was already responsible for much of the styling work at Triumph.

Michelotti asked if they could undertake a styling exercise, on their own initiative, and soon got on with producing a mock-up of the Stag concept. When presented to the bosses at Triumph, the response was immediate and the project to build the car got the go-ahead straight away.

Produced between 1970 and 1978, the Stag was conceived as a gentleman's sports tourer to compete head-on with rivals like the Mercedes SL. Powered by an all-new 3.0 V8, its 145bhp was sufficient to push the car to 115mph. Just 25,900 were produced, with around 9,000 still in existence according to the Stag club - a good proportion of survivors attesting to the enduring appeal of the model.

The Stag gained a reputation for unreliability in its day but, as with so much ‘perceived wisdom’ there was a lot of exaggeration and over the years the Stag’s faults have been ironed out turning it into the car it was meant to be. This is reflected in the rising value of the car with top class examples now gong for over £25,000.

This 1971 example represents an economic entry into the world of Stag ownership. The estimate reflects that the car is not perfect: the paintwork needs some attention and the interior is ‘lived-in’ or ‘patinated’ (your choice), but it is a runner and it has an MOT until 22nd June 2017 with no advisories recorded. It also retains its original engine and has the desirable manual overdrive gearbox.

Recent work to the car includes a replacement clutch in May 2013 and attention to the brake servo and calipers in July 2014 by Essex Street Garage in Nottingham. Following a move south, the car had a major service in 2015 at Saffron’s Garage in Bodenham (just down the road from Leominster) which included a rebuilt starter motor, a new alternator as well as the usual service items (plugs, points, etc.).

The car is an ideal candidate for using and improving with much of the work being within the scope of the average classic car enthusiast. It’s May, the days are getting longer and warmer, and in the words of the poet: ‘summer is a coming in, now’s the time to buy a Stag’.