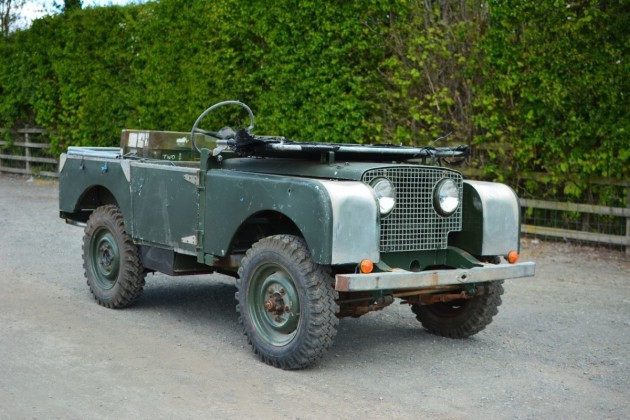 Post-war, Rover continued to make their quality, if rather staid range of cars. Beautifully engineered, they had relied heavily on their middle-class home market before the war and were suffering with steel shortages, the Ministry of Supply allowing only a certain number of home market sales per year in a bid to boost exports and claim the much needed influx of foreign cash.

It occurred to Maurice Wilks, Rover's Managing Director, that they should use more aluminium in their vehicles. There was plenty of that around thanks to wartime aircraft production and Wilks had also been toying with design ideas to replace his trusty Jeep that was used as a work-horse around his Pembroke Estate. The combination of a simple robust chassis and aluminium panels in a Jeep-like vehicle was a masterstroke, the resultant vehicle remaining in production almost 70 years on.

This lovely, original example was purchased by the vendor in March 2006. A marque enthusiast, he knew he had to have it as soon as he clapped eyes on it, its sound but scruffy originality being very much part of the appeal. According to the DVLA ownership history on file, this Series 1 80” 1.6 petrol was supplied new to a Mr Wilkes of Northampton in October 1950 and subsequently spent much of its early life in and around the region with half-a-dozen owners. Its original plate, GBD 389, was transferred onto another vehicle in 1991 by its then-owner and it received its current BOC 544A registration at this time. From this point on the vehicle remained in Somerset with homes in Bath, Yeovil and Weston-Super-Mare.

The history file includes a selection of photographs showing the vehicle in use with its canvas top, original interior, motor and underside. Further photographs depict the truck in various stages of undress undergoing a host of remedial chassis and suspension works. There are three old MOT certificates from the late ‘90s showing 10,859 miles at each test. A selection of invoices for parts purchased and works undertaken are also on file. It seems that at some point in its 67 years, a power-take off was fitted, but has since been removed.

The truck comes to us as a running project with a host of spares included in the large green box in the back along with the canvas roof frame and associated parts. It starts and ran sufficiently well to allow us to move it around for these pictures, although the brakes will need attention.

Appearing to be largely sound and understood to be a matching numbers example in largely original condition, this running project will no doubt keep the buyer busy for a good few months. However, with interest in early Land Rovers seemingly surging by the month (especially since JLR announced that they are to recommence production of the S1 after a 60-year interlude!) this could yet prove a shrewd investment.