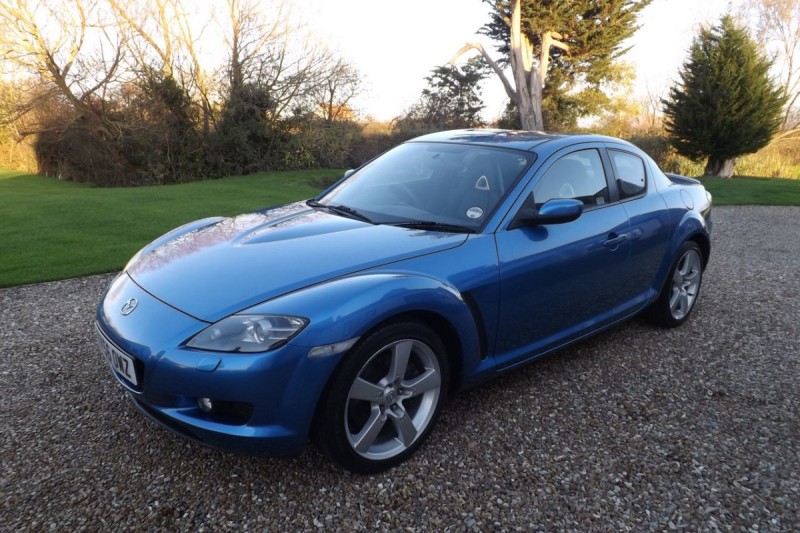 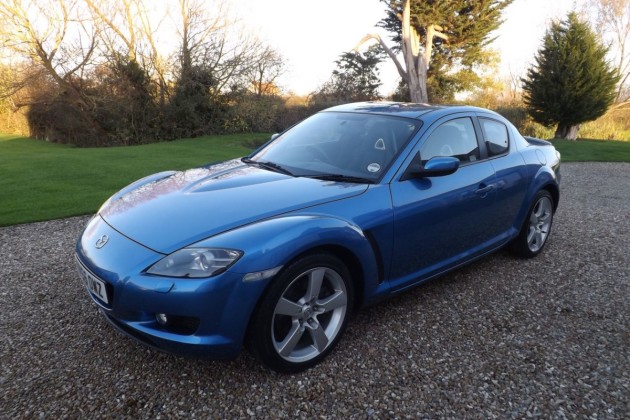 THIS CAR HAS NOW BEEN WITHDRAWN. APOLOGIES FOR ANY INCONVENIENCE CAUSED.

Launched in 2003 under the slogan ‘a sports car like no other’, the RX-8 certainly lived up to its billing and was a fascinating machine on many levels.

Quite apart from being the only sports car on the planet with a rotary engine, it also had suicide doors and eye-popping styling with a hunched aggression and a malevolent insect glare that made it look like a praying mantis poised to strike – but in a good way.

And the performance certainly lived up to the predatory looks with sizzling pace, fine handling and razor sharp responses thanks to a low centre of gravity, perfect 50:50 weight distribution and astonishingly effective brakes.

This superb balance was achieved by mounting the engine behind the front axle and the fuel tank ahead of the rear axle. Weight was kept down by imaginative combinations of materials. The body was mainly steel, though some panels were rendered in either plastic (as were the bumpers at either end) or aluminium. The manual gearbox also uses a carbon fibre composite driveshaft to reduce the rotational mass connected to the engine. Front suspension was by double wishbones with a multi-link setup at the back.

It was initially available with two versions of its 13B-MSP ‘Renesis’ engine; one rated at 192bhp, the other at 231bhp. Confusingly the less powerful motor had more pulling power but was equipped with a five-speed gearbox rather than the six-speed in the higher output version. Although the power figures were very respectable – especially considering the motor was a 1.3-litre – it did need to be worked quite hard to get the most out of it.

Of course that had consequences when it came to fuel consumption. Mazda claims a figure of 25mpg is achievable but in reality you'll be lucky to get topside of 20mpg in everyday driving. Still, with a 0-60mph time of 6.4 seconds, the RX was worth it for the thrilling way it delivered its performance.

This relatively early 2005 model RX-8 features the higher-powered 231bhp engine and the six-speed manual gearbox. Coming from a deceased estate, it has had just one owner from new and has covered a mere 5,600 miles in its 12-year life to date.

Looking stunning in electric blue with a black leather interior, it looks like it has hardly ever been sat in, let alone driven. Last on the road in 2015, it is due to have a fresh MOT in time for the sale. Combining everyday practicality with Lotus-like handling, Porsche performance and looks to die for, it is a sure fire collector’s car of the future. Find a better one...