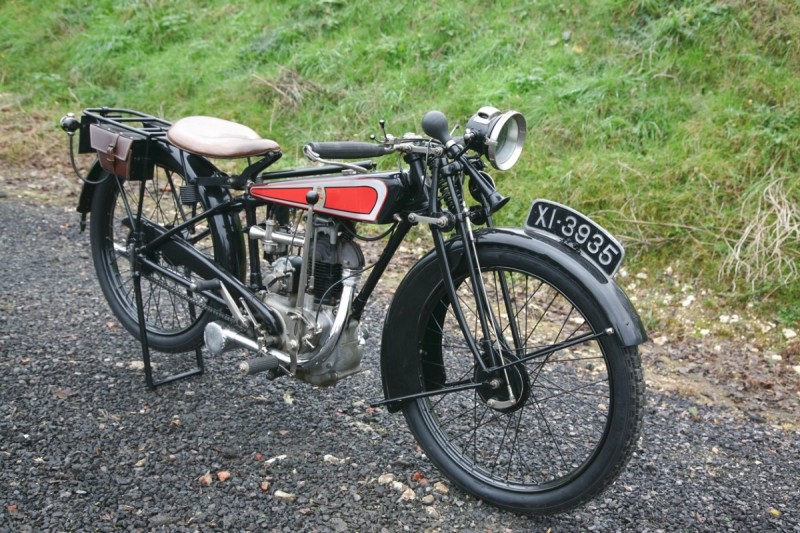 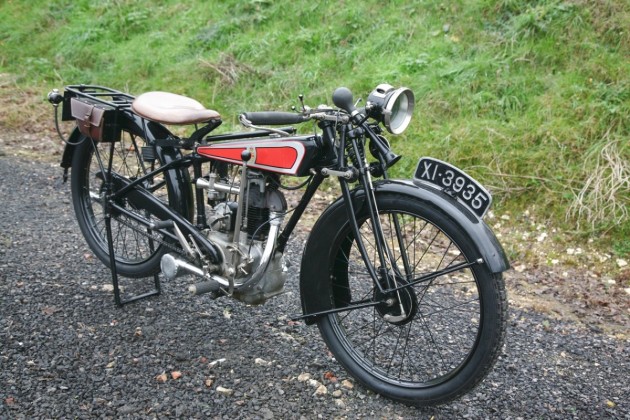 The Rover Motor Company’s origins date back to the very early days of cycling. John Starley and William Sutton founded Starley & Sutton in Coventry in 1878 to produce tricycles. Starley went on to create the revolutionary Rover Safety Bicycle in 1885, with two wheels of the same size and chain drive, setting the design for bicycles for the next 130 years.

By 1899 Starley was importing Peugeot motorcycles and developed his own Peugeot-engined Rover motorbike before his early death in 1901. The Rover Company was subsequently taken over by the entrepreneur (and soon to be convicted fraudster) Harry Lawson, the Imperial Rover motorcycle appearing for sale in 1902 under his stewardship.

Motorcars were also produced under the Rover name at that time and although the motorcycle was well-received, the bike market was considered to be rather volatile, so motorcycle production dwindled and was dropped altogether in 1927, by which time over 10,000 bikes had been produced.

A motorcycle is, by definition, a pair of wheels with an engine and various bits of attached tin-ware. There are motorcycles, though, that are much more than the sum of their parts, and this 1925 Rover is one of them.

Rover produced an all-new unit-construction machine in 1924 with a 250cc single cylinder engine, which was developed into a 350 the following year. The overhead-valve engine, unit-construction design and four-speed gearbox were all pretty advanced at the time, but Rover had already established a reputation for quality engineering and the bike was capable of 60mph - not bad for a 350.

In fact, Rover were confident that the bike was not only capable of 60mph in standard form, but that: "If an aluminium piston were fitted, at a cost of but 75/6d, this could be improved upon". And all for the modest sum of £55.

This fine machine was bought new by Robert Cameron of Carrickfergus, Ireland, in December 1925 (original bill of sale on file). He took it on a 1,000 mile tour of the new Irish Free State and was so impressed with the Rover that he held on to it for the next 78 years. Sadly, there is no record of how many miles he covered in that time.

Following Mr Cameron’s death, the Rover was acquired by the National Motorcycle Museum who had the bike restored, and, in 2011, used it on the Banbury Run. The Rover is now for sale and has covered few miles since its restoration, but participation in the Banbury Run shows that it is more than a static museum exhibit.

It is not known how many of these unit-construction Rovers survive – when did you last see one? It has been fully restored, has only had three owners (Mr Cameron, his son and the National Motorcycle Museum) and is ready to go - with, we assume, an aluminium piston already fitted. The lively performance, two wheel brakes, acetylene lighting, enclosed valve gear and quality engineering all make this an attractive and practical touring prospect and we hope the new owner will consider re-creating Mr Cameron’s 1,000 mile tour of The Emerald Isle.

The Rover comes with a large document file, including the original bill of sale, a photocopy of the owner’s handbook, some past tax discs (one from 1934), an original buff logbook and V5C. Mr Cameron’s son has also indicated that he is happy to talk to the new owner and help to establish more of the bike’s history.

If you only buy one vintage motorcycle this year, this is the one to go for.

AMENDMENT: We are indebted to Mr Cameron's son for the following clarifications: Mr Cameron bought this bike in 1925 and kept it until his death in 1979 when his son inherited it, passing it to the National Motorcycle Museum  in 2003. The gearbox is three-speed (not four as stated). It has the rare feature of a positive neutral between each gear. The valve gear with exposed pushrods and rockers cannot really be decribed as 'enclosed valve gear'.