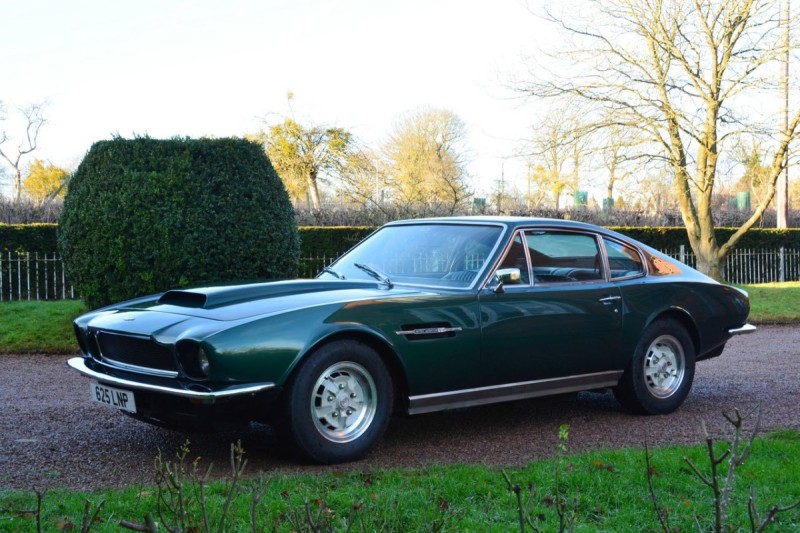 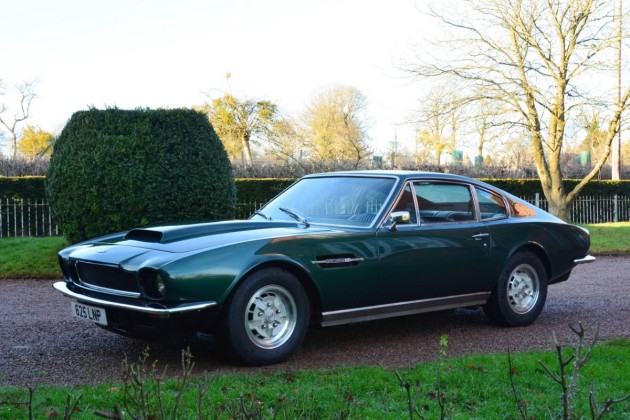 Memorably described by the late Paul Frere as "a civilised Ferrari Daytona", the Aston Martin V8 was not only the finest British GT of the Seventies, in Vantage spec it was also our very first homegrown supercar. Oozing an easy thuggish charm, it made rival Italian offerings look flash and fragile by comparison.

As with all traditional Astons, each one was entirely handbuilt by craftsmen at the Newport Pagnell works, requiring over 1,200 man-hours to finish. Styled by William Towns, the lines were a sharp break with the past, the taut aluminium skin looking flat, chiselled and aggressive where the old DBs had been curvy, soft and cultured.

The wire wheels fitted to the straight-six models were deemed inadequate for the grunt of the new V8 so specially made 15” GKN light alloys were used instead, their squat stance just adding to the brooding presence of the car. With leather on every surface, the restrained opulence of the air conditioned interior was a fine place from which to view the world as it hurtled past at over 150mph.

Under the bonnet lurked a chest-thumping 5.3-litre V8, a modified version of the Tadek Marek-designed lump first used in the Lola Aston Martin sports racing cars, and which was to power all production Astons for the next two decades. With quad overhead cams and Bosch mechanical fuel-injection, it looked the business and made all the right noises. Like Rolls-Royce, Aston considered it vulgar to disclose specific output figures, customers being assured that the performance available was 'more than adequate' for any eventuality.

“Whatever the undisclosed output of the Aston V8, it is enough to rocket this heavy car to 60mph from rest in exactly six seconds and to 100mph in only 14.7 seconds,” said Motor magazine. “Much more than this, we were able to reach 138mph from rest in a mile and on the Continent record a mean maximum speed of 161.5mph.” Even today, estimates of the power of the engine vary depending on the sources you consult, but somewhere around 320bhp and 340lb/ft is probably not too far wide of the mark, with a Countach-humbling 432bhp and 400lb/ft available in the Vantage model.

The Series 3 which followed in August 1973 got a few minor styling tweaks and interior improvements along with improved cooling and a redesigned fuel tank to give more luggage space in the boot. Most significantly it gained a quartet of twin-choke, downdraught Weber 42 DCNF carburettors instead of the troublesome fuel injection, a change which brought increased torque and smoother running at lower speeds while also improving emissions for the increasingly stringent American market. It also necessitated a larger bonnet bulge to clear the air box, making the Aston even more intimidating as it surged into the mirrors of lesser machines.

“A well-equipped car with magnificent stride for long journeys” was how Autocar magazine concluded its 1973 road test of a Series 3, revealing that the new version of the V8 Aston engine with four carbs and automatic transmission had proved nearly as quick as its manual transmission, fuel-injected predecessor and fractionally more economical (well, all things are relative!).

The Series 3 was to remain the mainstay of the business until 1978 when the revised Series 4 ‘Oscar India’ models were introduced with their closed bonnet air-intake and further interior revisions. Only 4,021 V8s were built in total between 1969 and 1989 of which just 969 were carb-fed S3 models and it is said that Aston Martin lost money on every one they made – just adding to their allure today.

First registered as LHP 178P in December 1975, this particular Series 3 Automatic comes with a good history file from new and was originally owned by JG Berry (Wine Importers) of London who appear to have kept it until 1992, covering only 10,000 miles in this 17-year period. It was then acquired by City of London Options from whom the Classic Car Club of Woking acquired it in 1996 at which point it had still only covered around 20,000 miles. They were to keep it until 2006, old MOTs showing that it must have proved very popular with Club members as it seems to have clocked up about 15,000 miles a year during their 10-year ownership.

It then had three further keepers in quick succession (two of them dealers) before being acquired by the vendor from marque specialist Runnymede Motor Company of Buckinghamshire in June 2011. Invoices on file show that the sills were replaced in 2008 (since when the car has only covered some 4,000 miles) and a new stainless steel exhaust system fitted. As part of their pre-sale preparation, Runnymede also treated the car to a bare metal repaint in early 2011, changing the colour from the original light blue metallic to the current Buckingham Green. The number plate was changed to 625 LNP at around the same time.

A large file of invoices chart regular maintenance throughout the life of the car with early servicing being carried out by the likes of Aston Works Service, Ian Mason, Lancaster and Aston Engineering of Derby. During the vendor’s ownership it has continued to be pampered with invoices on file amounting to over £30,000 in the past seven years.

This included a thorough inspection by Four Ashes of Stratford in 2012/13 to address any faults which resulted in a full brake, steering and suspension overhaul with many new parts including new Koni shock absorbers, an engine tune and service, waxoil treatment plus numerous other jobs at a cost of some £14,000. Another trip to Four Ashes in 2014 resulted in the cylinder heads being rebuilt with unleaded valve seats fitted, carburettors overhauled and a new fuel pump and aluminium fuel tank fitted at a cost of some £9,000.

In April 2015 the car was sent to Aston Workshop of Durham for another bout of fettling at a cost of almost £7,000 (new gearbox mountings; new crankshaft seal; various electrical jobs; new seat foams and interior detailing etc) since when it has covered only 1,000 miles. A new radiator from Radtec Racing was also fitted in 2012 and a new starter motor in 2015 while a battery cut-off switch is fitted in the boot. The file also includes 24 old MOTs back to 1992 and detailed condition reports on the car from both Four Ashes and Aston Workshop.

Kept garaged during the vendor’s ownership and sparingly used in fine weather only, the car is in generally very good order throughout and is said to drive as it should with an MOT until October 2018 with just two minor advisories (play o/s front wheel bearing; o/s rear trailing arm bush deteriorating). It certainly started promptly and ran beautifully on the occasion of our visit on what was a very cold, damp winter's day with a notably sweet and quiet engine.

Only reluctantly for sale to free up space and funds for the vendor’s growing Italian motorcycle collection, this pampered ‘matching numbers’ British bruiser has a reassuring service history from some of the best names in the business and is ready for a new owner to enjoy over the coming season.

For an informative guide to the V8 model, copy and paste this link into your browser: http://www.classicandperformancecar.com/aston-martin/v8