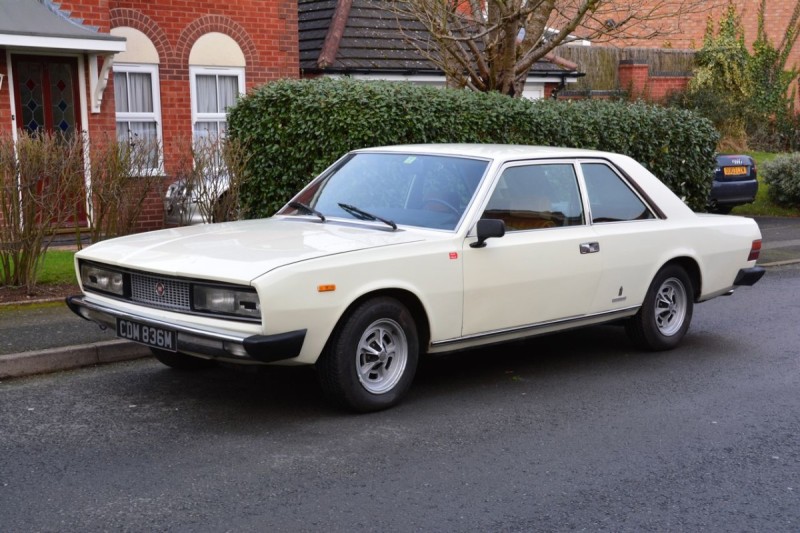 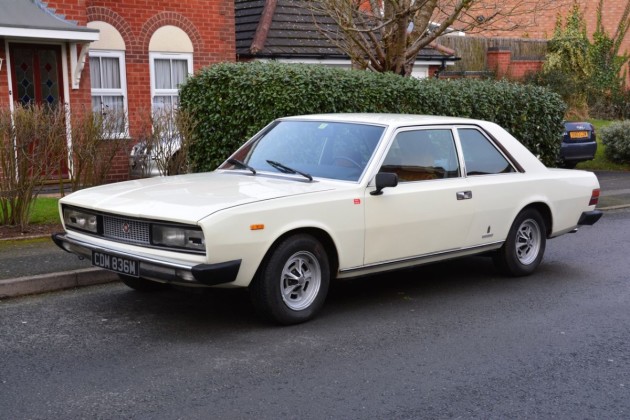 Memorably described by Martin Buckley as “a majestic blend of severity and grace, boldness and subtlety, sharp angles joined by soft curves, a true catwalk beauty, a masterclass that was widely copied in the Seventies but never equalled," the Fiat 130 Coupe belongs firmly in the ‘haute couture’ rank of car design.

Austere and aristocratic on the outside, it was pure hedonism on the inside with club class seats in funky ribbed velvet and a ribbed headlining that could have come straight from an executive jet. Launched in 1971 and styled by Pininfarina’s Paolo Martin (who also penned the remarkably similar Rolls-Royce Camargue, the most expensive car in the world in 1975), each 130 Coupe was painstakingly coachbuilt at the Pininfarina works in Cambiano rather than being mass produced at the Fiat works in neighbouring Turin.

Powered by a 165bhp 3.2-litre twin overhead cam V6 driving through a 3-speed automatic gearbox, it could accelerate to 60mph in 9.5 seconds with a top speed of 118mph. With ZF power steering, disc brakes and independent suspension all round, it had excellent road manners and was a worthy rival to the Jaguar XJ6 in terms of ride and handling, although considerably more exclusive and expensively dressed.

The cabin bristled with nice touches like a centre console button which let the driver open the passenger door without stretching; recessed chrome handles behind the tops of the front seats to bring them smartly forward without any fumbling for levers underneath; retractable rear sun blinds; air conditioning with swivelling eye-ball vents; electric front windows; levers to open the back windows with a flick of the finger and an aircraft-style anchorage hoop for the seatbelts. The two-spoke steering wheel, wooden dash/door trims, throttle-like gear lever and row of six unlabelled flick switches just added power boat chic to the 'mile high club' vibe. A heady jet set cocktail that still beguiles today, let alone in 1971...

Production finally ended in 1976 after just 4,491 Coupes had been made, the vast majority in left-hand drive and just a handful sold to the UK market, with celebrity owners including Sophia Loren, Dusty Springfield and Lord Carrington, people who could afford the £60k price tag in today's money. To prove how good it was, even Enzo Ferrari had one as his company car.

This particular LHD Coupe is a rare 5-speed manual version, one of perhaps 900 made, which makes the most of that lusty V6. It was supplied new to its first owner in Scortichino near Bologna in 1974 from whom the previous owner’s cousin, Luigi Bruno of Montichiari acquired it about six years later. He was to keep the car for the next 37 years but used it very sparingly, the 35,788 kms on the clock (23,000 miles) being said to be genuine although there is insufficient documentary evidence to warrant this.

An Italian resident in the UK, Bruno’s cousin acquired the car in early 2017 and brought it to England shortly afterwards, selling it to our vendor a few months later. In highly original condition throughout, we are told that it had some minor restoration about 15 years ago and it remains in exceptionally sound condition today with no signs of any significant corrosion.

The vendor drove the car up to the Midlands from the South Coast a few months ago and reports that it drives well with an MOT until August 2018, the only minor advisories being ‘o/s/f brake hose slightly deteriorated; n/s/f lower ball joint dust cover damaged’. He also recently treated the car to a check-over including all fluids topped up, fresh oil in the rear diff and adjustment of the clutch.

It certainly performed beautifully when we were treated to a spirited test drive on the occasion of our visit with lively acceleration and a notably smooth and rattle-free ride, as you would hope from such a low mileage example. Indeed it handles so well and absorbs bumps with such aplomb that it is hard to believe it is over 40 years old and one wonders what suspension designers have been up to these last few decades… Finished in its original Bianco white with the original orange ‘Playboy pad’ interior (with some deterioration to the front seat squabs), the ‘severity and grace’ of its lines are undimmed and it still exudes road presence.

Beautifully built, handsome and decently quick, these decadent coachbuilt Coupes are now extremely rare (with only 25 Fiat 130s of all types still currently road registered in the UK according to DVLA figures, of which perhaps only six are Coupes) and they strike us as remarkable value in the current market.

Don't take our word for it: Quentin Willson recently singled out the Fiat 130 Coupe as one his 'smart buys' in Classic Cars magazine, stating that: "I'm expecting to see the very best moving towards £50k soon."

PS: For a fascinating archive of Fiat 130 magazine features and road tests, copy and paste this link into your browser:
http://fiat130.nl/