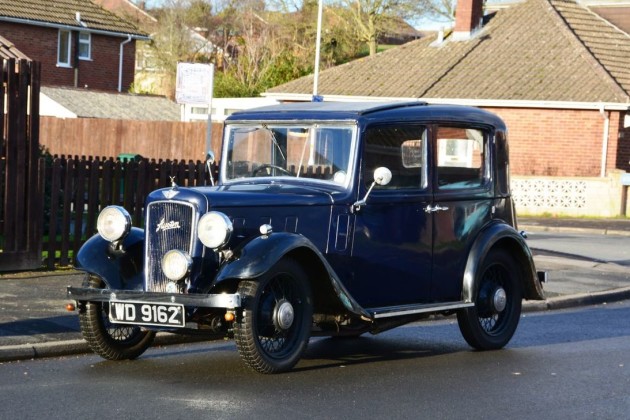 Fitting between the 'baby' Austin 7 which had been introduced in 1922 and the Austin 12, the design was conservative with a pressed steel body built on a cross braced chassis which was designed to give a low overall height to the car by dipping down 2.75 inches between the axles.

It was powered by a four-cylinder side-valve producing 21bhp and driving the rear wheels through a four-speed gearbox and open drive shaft to a live rear axle. Suspension was by half-elliptic springs all round and the brakes were cable operated. Mechanical upgrades for 1934 included a stronger chassis, synchromesh on the top two gears and 12-volt electrics. The radiator surround was also changed from chrome to painted steel and flashing indicators replaced the semaphores.

By 1933 the saloons had been joined by an Open Road tourer, a Colwyn Cabriolet and a 6-8 cwt Van. A sports model, the 65mph Ripley, and a Clifton two-seater joined the range in the following year. The four-light saloon was given the name Lichfield and got a protruding boot which enclosed the spare wheel. The Lichfield cost £155 and was capable of reaching 55mph with 34mpg economy, remaining in production until 1937.

First registered in Warwickshire in March 1935, this charming Lichfield has had just three owners from new, according to the V5C, the vendor acquiring it five years ago from a gentleman who had owned it for almost 20 years. When acquired the car had been languishing in a Welsh barn for some time and was running badly so the vendor entrusted it to pre-war specialists, Alderton Austin Services of Tewkesbury, for a thorough going over.

This resulted in a full engine rebuild with new pistons, remetalled main bearings and reground crankshaft, a new wiring loom, new exhaust system plus various other items at a cost of £3,714 (invoice on file). Four new tyres from Longstone have also been recently fitted. Since the engine rebuild the car has covered fewer than 1,000 trouble-free miles, attending various Austin Club runs and rallies in the Midlands and beyond and doing bridal duties at a couple of family weddings.

Starting promptly and running nicely as we moved it around for these photos, it is only reluctantly for sale due to the advancing years and ill health of the owner. Being offered here at no reserve, it retains its original WD number plate which is transferable and no doubt has a value of its own – not that we condone that sort of thing, obviously...