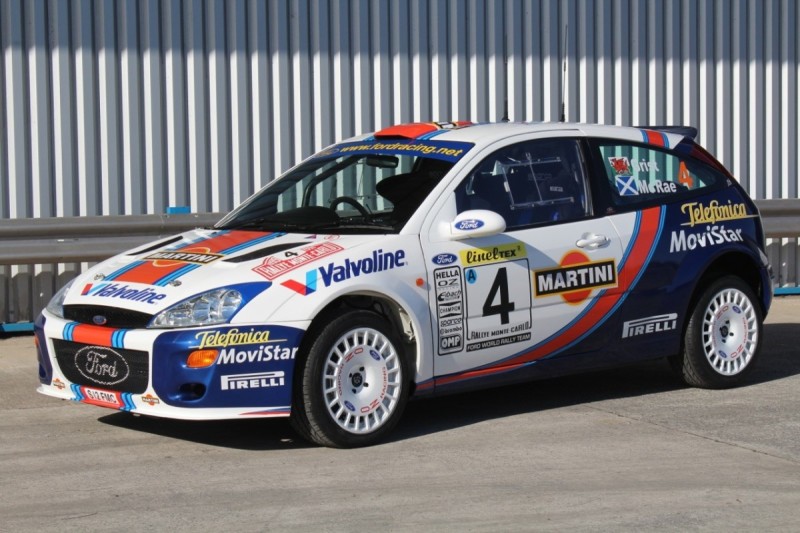 Making its debut in 1999, the Ford Focus RS WRC was specially built by Ford’s official M-Sport partner to take on all comers in the World Rally Championship, a task which it accomplished to good effect, winning 44 world rallies and two manufacturers’ world titles before it was replaced by the Ford Fiesta RS WRC in 2011.

Run by former WRC star Malcolm Wilson, M-Sport has prepared and run all Ford’s WRC cars from 1996 to the present day, the base cars being sent by Ford up to Dovenby Hall in Cumbria to be completely rebuilt into the formidable all-wheel-drive rally weapons that have won so many trophies for the world’s fifth biggest car manufacturer.

Although this car will fool 99% of the people 99% of the time, it is in fact not a genuine WRC car but an incredibly convincing lookalike. As M-Sport correspondence on file confirms, it was purpose-built at their facility in Cumbria alongside the actual WRC cars, using the same specially made steel wings, aero kit, OZ alloys, M-Sport wheel centre caps and sponsorship decals as the rally cars. One of a handful that they made, its job was to tour the country promoting the rally debut of the Focus and the signing of star driver/co-driver, Colin McRae and Nicky Grist.

Originally fitted with standard Ford Focus 1.4 Zetec running gear and interior, it was subsequently acquired by a private buyer who transplanted it with the engine, gearbox and running gear from a later Focus RS. It has also been kitted out with a full race interior that is virtually indistinguishable from the real thing. The attention to detail is astonishing and the car needs to be seen to be fully appreciated – it is packed full of rally gadgets and equipment and even wears the famous S12 FMC number plate from the works car driven by Colin McCrae, Carlos Sainz and Simon Jean-Joseph in 1999/2000 (which is transferable and no doubt has a substantial value of its own).

Signed by Nicky Grist himself, this unique WRC lookalike is fully road legal and comes with a V5C (which records it as a 1999 Ford Focus Sport 1.4), a Ford data sheet from the Focus RS 2.0 Duratec which donated the engine and running gear, an MOT valid until August 2018 and a copy of the limited edition book ‘WRC: The Focus Era’ (no 1836 of 2000).

Drawing a crowd wherever it goes, it is sure to arouse a great deal of interest on the show circuit and would make an ideal promotional vehicle in any Ford dealership or competition car outlet.