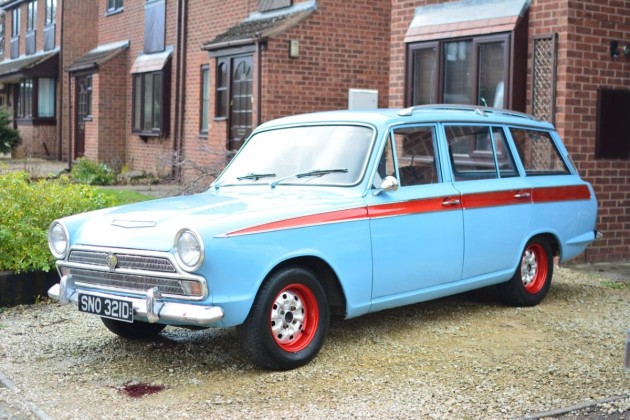 Offering an alternative take on the ‘daily driver’ classic, this rather cool and quirky Cortina MkI Estate dates from October 1966 and looks, at least from the outside, largely original.

However, open the bonnet and you will find not the original 1200cc engine but a rather more modern Ford 2.0 Zetec with fuel injection, aluminium radiator and Kenlowe fan. A later Ford Type-9 five-speed gearbox is also fitted with electric adaptor for the ECU. A Mondeo flywheel and Pinto clutch connect via a custom propshaft to drive the rear wheels.

Although the Mondeo engine is in standard tune, the original suspension was deemed unfit for the task, so the old lever arm shocks were binned and replaced by telescopic shocks with Escort-sourced mounting plates and lowered rear springs. The front gained a set of Sierra legs and modified springs with additional strut brace. The steering was improved with a bespoke steering rack, track control arms and compression struts allowing a full range of adjustments.

The exhaust is a custom made 2-inch system with stainless manifold and the fuel tank is aluminium with a stock Mondeo fuel pump. Sierra discs have been fitted up front with standard rear drums and braided hoses. The car rides on Cortina GT steel wheels colour coded to match the stripe on the bodywork. Illumination is provided by upgraded HID headlights rather than the old candles behind glass originals!

Internally the car appears largely stock with inclusion of MkI Cortina GT clocks and gauges and new fuse box with two rows of LED lights to signify a blown fuse. A modern face-off CD player has been fitted with concealed speakers. The windscreen wipers have been improved with a more modern MkV Escort motor linked to the original Cortina linkages. New carpets have been fitted although the interior retains its original charm by keeping the original brown vinyl front and rear seats. A set of useful Mondeo roof bars have also been fitted.

Finished to a good standard, the car comes with its V5 and a current MOT until September 2018 showing only two minor advisories. Used on a daily basis for the last year, the vendor reports that it’s great to drive and easily holds its own in modern traffic.