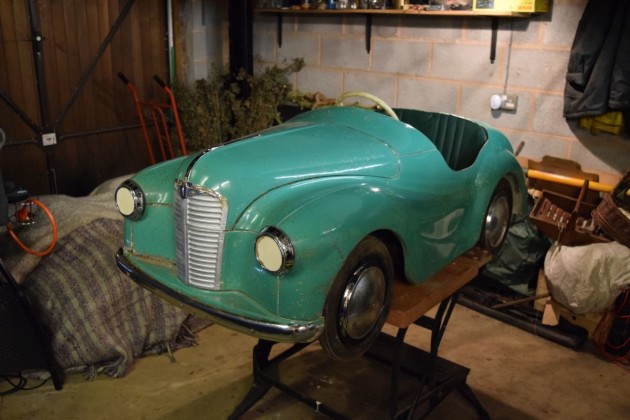 Austin pedal cars were made by the same Austin Motor Company that made full-sized cars in Longbridge, although the miniature versions were made in a specially constructed factory at Bargoed in South Wales.

The pedal car factory opened in July 1949 and was called the Austin Junior Car Factory. It was actually paid for by Government funds and was run on a not-for-profit basis and purely for the employment of disabled coal miners, around 250 of whom worked there at any one time.

The cars were made from scrap off-cuttings of metal from the Longbridge car factory and were built and painted in more or less the same way as the motorcars. Later examples apparently used thinner gauge steel and are noticeably lighter than the originals.

At launch the J40 cost £27 plus £6 purchase tax, about three weeks’ wages for a working man. Although most were sold to indulgent parents, a fair few were sold to Local Authorities to teach road safety to school children and many were also fitted to roundabouts at fairs.

Dating from 1965, this late (and therefore lighter) example is in original condition and has built up a charming patina over the years, although all parts to restore these cars are readily available should its new owner wish to bring it back to its former glory. Being a lightweight, it should give Nipper an advantage in the J40 Settrington Cup at Goodwood, especially if he overdoes the pudding the night before the race...