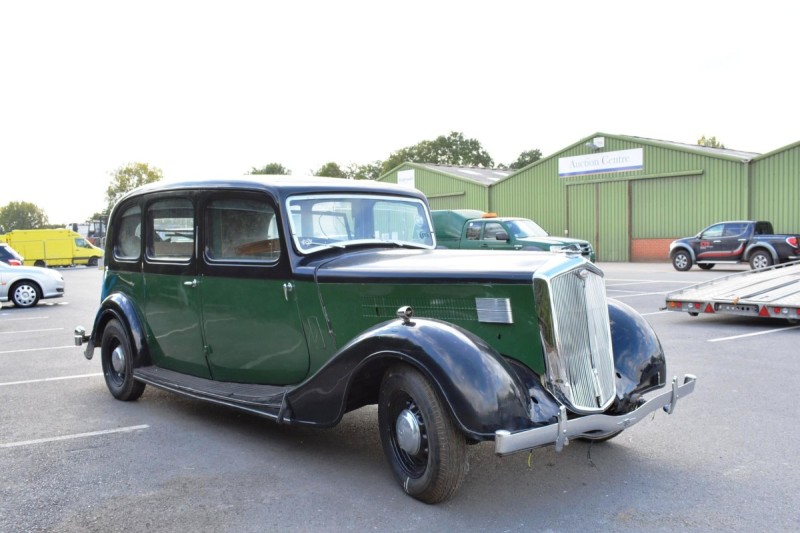 Launched at the 1935 Motor Show, the Wolseley Super Six Saloon came in 16hp, 21hp and 25hp forms and was basically an upmarket version of the Series II Morris with a four-speed gearbox, Easiclean wheels and a more luxurious interior.

In May 1938 a long wheelbase limousine version of the 25hp was also made available to cater for the chauffeur-driven end of the market. Fitted with Wolseley’s largest 3.5-litre six producing 110bhp, it could comfortably carry seven passengers and top 100mph given a long enough run up. Briefly re-introduced after the war as the Series III, it was always a very exclusive machine and only 175 were sold in total.

First registered in London in May 1937, this 25hp Limousine is on offer here from a deceased estate as an unfinished project. Unfortunately there are no bills to detail the restoration carried out to date but, as you can see, much of the hard work appears to have been done – the body has been restored and repainted, and the interior partially retrimmed in green leather. We understand that the car has also been partially rewired (all unconnected wiring is labelled), a new exhaust has been sourced along with a new fuel tank and a replacement steering box. The engine has been started fairly recently and the car last moved under its own power about three years ago.

Supplied with a large quantity of spares and an original Wolseley Super Six handbook, DXW 269 is believed to come complete with all parts required to finish the job (including the Lucas P100 headlamps), but bidders are advised to check this for themselves by personal inspection. There is some suggestion in the history file that this car may be part of a fleet ordered by Clement Attlee for official use, but again you would have to do your own research on that score.

Believed to be one of only 12 such cars surviving, this rare and imposing limousine now needs an enthusiastic new owner who can supply the finishing touches and preserve it for future generations to enjoy.