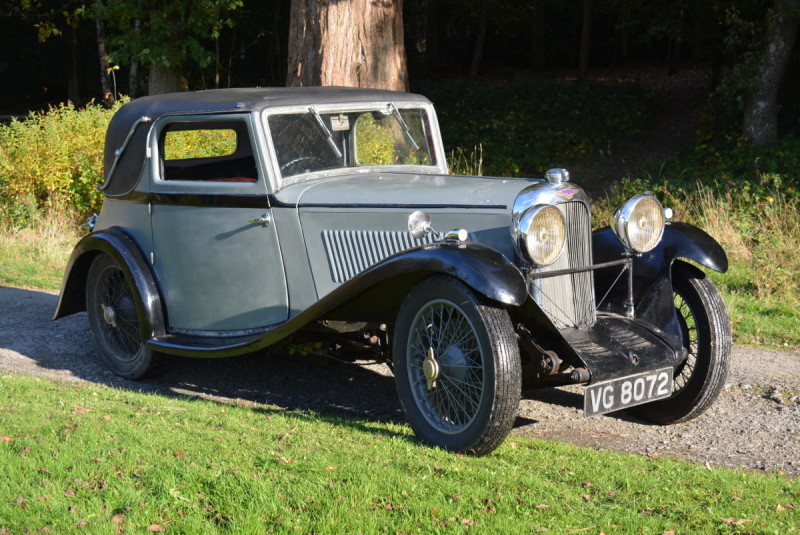 Established in 1906, Lagonda are best known for their range of large sports and touring cars, but in the early 1930s they decided to revisit the light car market.

In 1932 they approached engineer Tim Ashcroft with a brief to produce ‘Britain’s finest 1100cc engine’ while Charles King was appointed to look after the chassis design. Ashcroft was known to be something of an eccentric genius, a contemporary account describing him as: “A tall, distinguished-looking man, wearing a monocle and with the disturbing habit of stopping any conversation he was not interested in by pulling the front of his trousers forward and letting his monocle drop down into the void.”

The engine he came up with was a real gem and featured twin overhead camshafts (virtually unheard of in a road car at the time) and a massive fully-balanced crankshaft running on three main bearings of 2-inch diameter – the same as those in Lagonda’s 4.5-litre engine. The ingenious valve gear followed race car principles, opposed at 90deg in the cross-flow head and using curved finger followers to give plenty of low-down torque without compromising high speed power (an early form of variable valve timing).

Four beautifully engineered hemispherical combustion chambers with a 7.5:1 compression ratio and fed by twin SU carbs completed the package, delivering 50bhp and driving through an ENV pre-selector gearbox. Georgano describes it as “an unburstable engine with a potential of 6,000rpm” making it the highest-revving road car engine of its day.

King’s chassis had an 8ft 4in wheelbase and was bolted together to avoid residual stresses caused by welding. Immensely stiff and strong, it was worthy of at least a 3-litre car and was also one of the first to be fitted with Girling brakes, whose 25ft stopping distance at 30mph was a remarkable figure for the time.

The chassis price was fixed at £270 and customers could choose from a range of coachbuilt bodies which added another £100 to the cost: John Charles of London offering a drophead coupe, Abbott of Farnham a saloon and a tourer while other coachbuilders catered for more bespoke requests. Around 80% of customers opted for Abbott bodies, half choosing open tourers and half saloons, as here.

Making its showroom debut in early 1934, the Rapier light sporting car received a rapturous welcome from press and public alike. Praised for its excellent handling, braking and performance, a waiting list was quick to form.

“So lively is the engine that it gains revs almost as though supercharged, but it does not become fussy, 5,500rpm being a rev counter reading which can be frequently attained”, reported Autocar. “It feels somehow like a larger car. There is nothing in the least flimsy about it and the way in which it sits on the road is quite exceptional”, going on to record a top speed of 77.6mph and a 0-50mph time of 13 seconds (although Motor squeezed 80.3mph out of their test car). To prove the Lagonda’s sporting credentials, Edward Southwell Russell, 26th Baron de Clifford, came home 16th in his Rapier at Le Mans in 1934.

Unfortunately, Lagonda's demanding production requirements and over-complex model range proved unsustainable and in April 1935 the receivers were called in. By August a buyer had been found, the solicitor and corporate wheeler-dealer Alan Good, but at 6ft 5in tall and weighing 20-stone, he instinctively responded to larger cars and decreed that Rapier production should halt after about 350 had been made, preferring to concentrate his resources on the new 4.5-litre LG45 and V12 models instead. The manufacturing rights were sold to Tim Ashcroft who set up Rapier Cars Ltd in Hammersmith, where a further 46 Rapiers were completed before production ceased for good in March 1938.

This particular Rapier was built by Lagonda in 1935 and has an Abbott two-door fixed head coupe body. The previous owner bought the car in 1984 in a complete but disassembled state and planned to have it up and running in no time but life got in the way.

Worked on sporadically over the years, it was not until 2015 that the rebuild was finally completed. Since then it has covered some 3,000 miles. Care was taken to ensure that it would be reliable and useable. He was careful not to alter the appearance that only age can confer and so this Rapier is original and no amount of restoration will make it more so.

Purchased through Brightwells in 2018, the vendor is now focused on another project, hence his lovely Lagonda is now up for grabs. He entrusted it to Lagonda marque experts BishopGray in January 2019 for a check over. An invoice on file shows that they got it up and running, changed the oils and gave the chassis a safety check. In addition, they fixed the nearside window and fabricated an inner wing and landing panel, the total bill for this work adding up to £2,700.