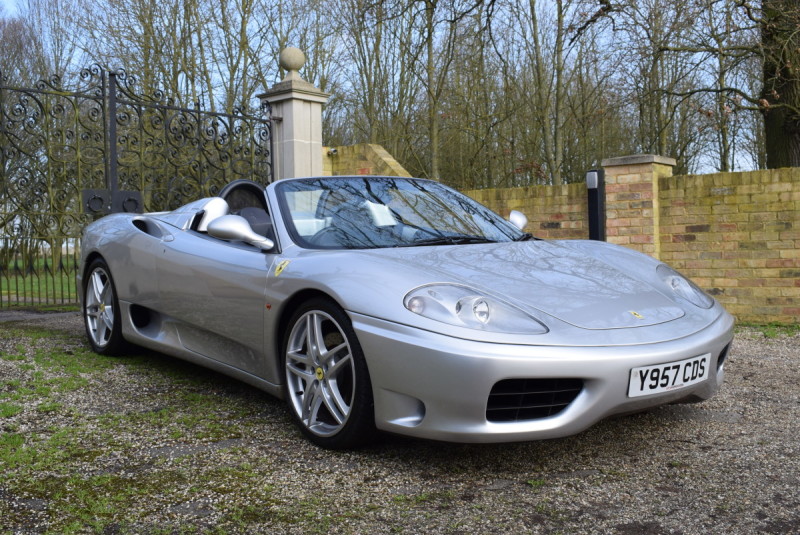 The Ferrari 360, produced from 1999 to 2005, was very much more than a facelift of its predecessor, the 355. An entirely new all aluminium space-frame chassis was designed with partners Alcoa giving a 40% increase in chassis stiffness compared to the steel design of the 355.

A new 3.6-litre V8, using a flat plane crankshaft and titanium connecting rods produced 395bhp and could, according to Ferrari, reach 100 km/h (62 mph) from standstill in an electrifying 4.5 seconds.

With chassis design and mechanicals concluded, Pininfarina then designed the ultra-smooth and elegant two seater body. Originally designed with a convertible in mind, the 360 had strengthened sills, stiffer floorpan and a redesigned windscreen frame to counter the inevitable loss in torsional rigidity when removing the roof. Neatly finished with distinctive roll bars, fully automatic folding roof and glass engine cover, the resulting 360 Spider was (and is) a thing of beauty.

The car being offered is an original RHD UK car sporting the highly desirable manual gearbox complete with 6 speed gated gear change. Built in 2001 and finished in Argento Nurburgring Silver with dark blue leather interior, the car has only covered 34,444 miles to date.

With significant documented service history, this example comes with the original Ferrari Certificate of Conformity and numerous receipts and bills for maintenance. Details show that the front suspension was overhauled in 2013 and that the cambelts and tensioners were most recently changed at 32,346 miles.

There is a near continuous MOT history with ten old certificates within the documents file and the car will be presented for sale with a new MOT.

Ferrari 360 Spiders with such low mileage and decent, recent service history are now highly sought after. This is a rare opportunity to acquire such a car.

AMENDMENT; Vendor has not had a chance to present for a new MOT as catalogued